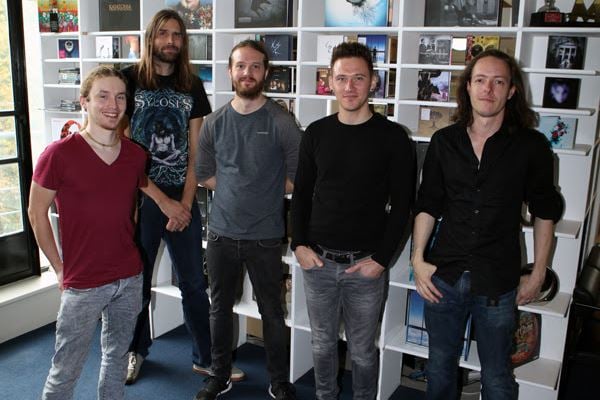 Kscope has announced the signing of UK's masters of modern progressive heaviness TESSERACT.

Amos Williams, TESSERACT bass player, commented on the signing: "Really looking forward to discovering the possibilities of working with such a creative label. We admire everything Kscope's done with bands like ANATHEMA, KATATONIA and Steven Wilson, and can't wait to see where they will guide TESSERACT in this new chapter of the band. Very excited!"

Over the course of the last six years, TESSERACT has been at the forefront of flourishing part of the ever-evolving metal scene. Originally formed as a studio project by guitarist Acle Kahney, TESSERACT immediately eschewed all well-established notions of what metal should sound like and swiftly became a unique and daring entity. Kahney had recruited a lineup worthy of his ground-breaking compositions, and the band embarked upon a quest to inject some originality and excitement back into an often myopic and lazy British metal scene.

The longstanding line up of drummer Jay Postones, guitarist James Monteith and bassist Amos Williams has recently welcomed back vocalist Dan Tompkins, whose first show back with the band was on the main stage at this year's UK Sonisphere festival. The band has already found a new creative energy having reunited with singer Dan Tompkins, and has already written half of its third album, the follow-up to "Altered State", slated for a 2015 release.

The primarily acoustic "Perspective" EP emerged in May 2012 to an effusive response from critics and fans alike, and shortly after the band's status as progressive metal's most fascinating new creative force was very publicly celebrated when TESSERACT picked up the "Best New Band" trophy at 2012's inaugural Progressive Music Awards in London.

Fans can experience the band's thrilling live shows across Europe as it begins an extensive tour with co-headliners ANIMALS AS LEADERS.