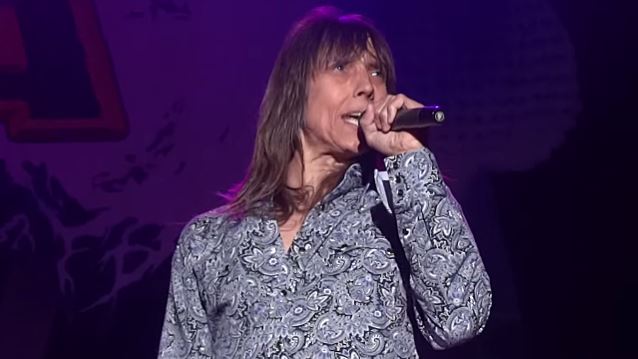 TESLA lead singer Jeff Keith has made a full recovery from his hip replacement surgery and is currently enjoying some much-needed rest and relaxation. The band will resume rehearsals for the Monsters Of Rock cruise next week and run through a set of songs from its latest album, "Simplicity".

TESLA's 2015 tour was cut short due to pain resulting from arthritis in Keith's hip, and the band had to make a quick decision to get him into surgery in order to be ready for the DEF LEPPARD/STYX tour this summer.

"Simplicity" sold around 14,000 copies in the United States in its first week of release to land at position No. 24 on The Billboard 200 chart. The record arrived in stores on June 10, 2014 via Tesla Electric Company Recording's arrangement with Entertainment One Music and distribution.

In an interview with NI Rocks, Keith stated about the band's approach while writing and recording the new album: "We wanted to keep it simple. With so much of today's technology, Pro Tools and all that stuff, it's very easy to overdo it and oversaturate the record, because there is an endless amount of tracks you can do and there are so many ways you can cheat and stuff. We like to make records that we can keep simple and reproduce live you know." He continued: "'Simplicity', we thought, was a great name for the record because we wanted to keep it simple and we're a simple blue-collar rock 'n' roll band. We always like to make records, like I said, that we can play live."

"Simplicity" was mixed by legendary producer Michael Wagener, who has previously worked with SKID ROW, OZZY OSBOURNE, METALLICA and DOKKEN, among others.