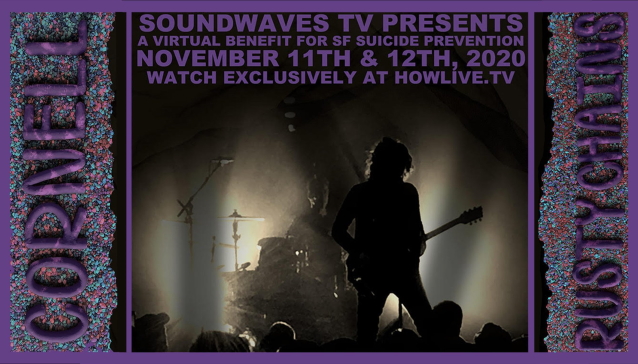 Dave Rude (TESLA), Phil Demmel (VIO-LENCE, ex-MACHINE HEAD), Craig Locicero (ex-FORBIDDEN) and Steev Esquivel (SKINLAB) are among the guest musicians who will perform with RUSTY CHAINS, the San Francisco Bay Area-based Seattle tribute act that focuses on the unique sound of the Northwest in the late 1980s and early 1990s — bands like SOUNDGARDEN, ALICE IN CHAINS, MOTHER LOVE BONE, SCREAMING TREES and PEARL JAM — at its fourth annual tribute to Chris Cornell. This year's event will be streamed over at HOWLIVE.tv, and presented/hosted by Soundwaves TV, with 26 songs split over two nights.

Says RUSTY CHAINS: "With the tragic and sudden loss of SOUNDGARDEN frontman Chris Cornell to suicide while the band was in the middle of their spring tour in 2017, the world was shocked that someone so brilliant, who had transcended the grunge genre to become a world-renowned, mainstream solo artist would take his own life, seemingly at the height of his career. Our hearts were broken. We as a band knew that we needed to pay special homage to him in a way that was more profound than just playing our typical set of classics.

"What we came up with was organizing a tribute show where we played a career-spanning set of songs, with the proceeds going to San Francisco Suicide Prevention as a way to raise awareness for suicide prevention. Our first annual Chris Cornell tribute and Suicide Prevention benefit took place a month after Chris's death in front of a sold-out crowd at the legendary San Francisco venue, Slim's, with the next two annual shows following suit. Our fourth benefit promises to be just as amazing, even though it will only be viewed on your screens. So please, tune in and help us help others in need."

Each night will have unique and exclusive setlists, with many special guests, spanning across Chris's entire career. All donations and merchandise profits will go to support San Francisco Suicide Prevention. The show is free and all are welcome.

Did you tune in to Soundwaves TV last night to check our first sneak peak at Cornell IV? We released Spoonman, which...

What? We got Dave Rude too?! Yes, Tesla's own Dave Rude is back this year to help pay homage to Chris and raise money...