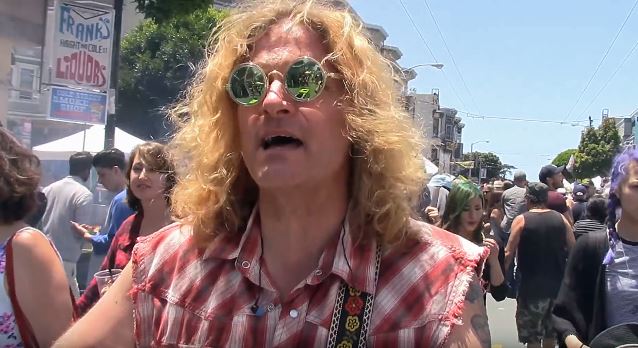 TESLA guitarist Frank Hannon has released a video for his new single, "Never Slowin' Down". The clip was filmed on June 12 in San Francisco, California during the 39th annual Haight Ashbury Street Fair — a historic gathering of people in a spirit of peace, love and music featuring members of JEFFERSON STARSHIP, QUICKSILVER MESSENGER SERVICE, THE DAVID NESLON BAND and a special celebration of the life of Paul Kantner.

"Never Slowin' Down", which is available now on iTunes and Amazon, was written by and features vocals, guitars, and piano played by Frank Hannon, along with bass by Aaron Leigh and drums by Blake DeMoss.

Hannon has this to say about the song: "Great artists like CREDENCE CLEARWATER REVIVAL, JEFFERSON AIRPLANE, IT'S A BEAUTIFUL DAY and THE GRATEFUL DEAD all had a sound that mix psychedelic rock and roll with county music and rootsy folk influences. My new single 'Never Slowin' Down' reminds me of those San Francisco artists that influenced me.

"This is a really fun video we filmed during the 39th annual Haight Ashbury Street Fair where it all started! I hope you enjoy it!"