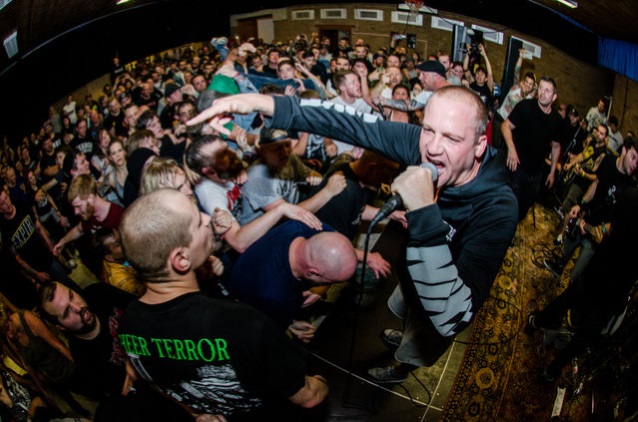 Long-running Los Angeles hardcore powerhouse TERROR will release its eighth studio album album, "Total Retaliation", in the fall via Nuclear Blast in Europe and Pure Noise in the rest of the world. The disc was recorded at Graphic Nature Audio studio in Belleville, New Jersey with producer Will Putney (BODY COUNT, THE ACACIA STRAIN).

TERROR's last release was "The Walls Will Fall" EP, which came out in April 2017 via Pure Noise Records (digital, CD) and Triple B (vinyl).

Vocalist Scott Vogel told New Noise that the lyrical inspiration for "The Walls Will Fall" came from a period in 2016 when he wound up confined to his living room due to a spinal injury, fixated on the news. "The second half of 2016, I had my eyes glued to CNN constantly, watching this election unfold," he said. "Seeing that, in 2016, there is talk from a lot of people about building a physical wall to build borders up. I thought it was such a crazy thing that that's where we are in 2016, now 2017: talking about building this wall with people cheering for it, instead of looking at what the real issues are. I am hoping — it's hard to have hope sometimes, [but] you got to hope that people start looking at things differently, that they look into solving real problems instead of putting up barriers with 'us against them,' instead of shutting others out."