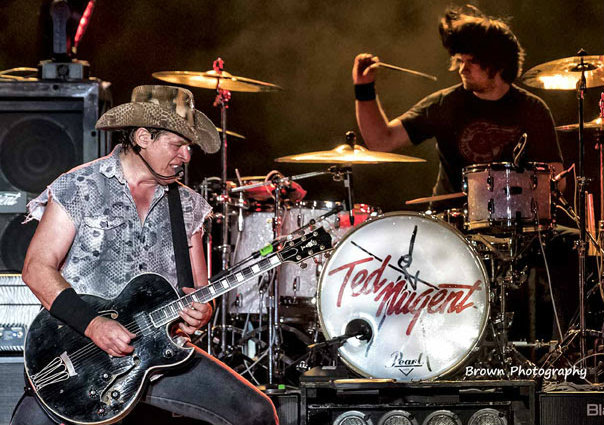 When Ted Nugent takes his rock 'n' roll to the masses on his annual summer tour, he'll be looking once again to his 22-year-old "budding master" to keep the indispensable beat that helps propel the guitar legend's Motor City Madness across the USA.

Jason Hartless already is a Ted Nugent band veteran as he prepares to embark on his second straight summer tour with The Nuge. But the Detroit-born, Berklee-schooled phenom began drumming at six months old (!) and has been a road warrior of high pedigree for a decade, since he started touring at age 12. Along the way, Hartless has toured as the support act for the likes of MÖTLEY CRÜE, GODSMACK, THEORY OF A DEADMAN, DROWNING POOL, REV THEORY, MOUNTAIN and WARRIOR SOUL, and he's been mentored by some of classic rock's hardest-hitting drummers, including Corky Laing (MOUNTAIN), Tommy Clufetos (BLACK SABBATH, ROB ZOMBIE), Eric Singer (KISS, ALICE COOPER), and Todd Sucherman (STYX). It was through Laing that the industry first took notice of the young drummer — very young, in fact. Jason was just 9 years old when his Laing-produced solo album, "First Division", was released with a band that included Richie Scarlet (Ace Frehley) and Jim McCarty (CACTUS, THE ROCKETS, MITCH RYDER & THE DETROIT WHEELS).

"Playing with Ted has been such an incredible experience," says Jason. "Being a fellow Detroit native, it's really neat because Ted has always been a hometown folk hero. He's really embraced me, and he's been almost like a mentor. We always talk about how to really capture the full essence of a groove and how to hone that while playing his music. Sharing the stage with Ted every night is such an amazing experience. Being able to play all the legendary rock songs with the man who wrote them is a dream come true."

Nugent has nothing but a heap of praise for his young drummer. "He works like a dog and learns," says Nugent. "He's real. I have worked with some of the best drummers on the planet, and man, he's right up there." He adds that Jason locks in with Nugent bass player Greg Smith to become "the greatest, most throttling driving force in music today. We kill every song, every gig, every lick, every night."

Jason got right up there as Nugent's drummer after touring as his opening act in the Detroit band PISTOL DAY PARADE while still a teenager. When Jason was looking for a new touring gig in early 2016, he contacted Nugent's management and was invited to audition.

Away from the Nugent band, Jason is pursuing his bachelor's degree in Music Business at the Berklee College of Music. Since the fall, Jason has been managing partner of Prudential Music Group, where he oversees day-to-day operations of two record labels and a publishing company. PISTOL DAY PARADE, whom Jason toured with from 2012 to 2015, was a Prudential artist that hit #19 on the mainstream charts with their song "Rockstar's Girlfriend". When not on tour, Jason teaches kids ages 7-18 music at a School Of Rock in Detroit, where, as part of his drum lesson curriculum, he teaches Music Business 101. Jason released his first instructional DVD, "Learn To Rock Drums With Jason Hartless & Friends", when he was only 16.