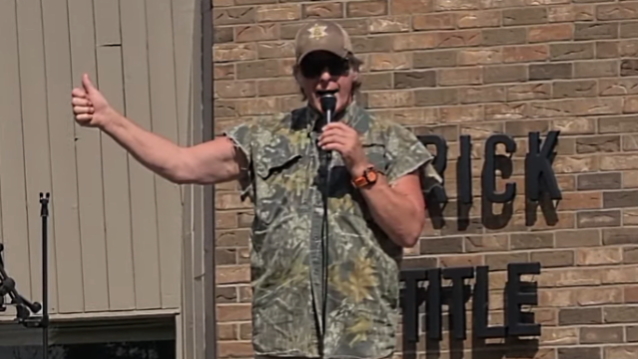 "Aren't there any BLM punks who want to come up and harass me?" Nugent asked the crowd.

A few second later, Jalen Brown approached the stage to challenge the singer.

"Black Lives don't give a shit about black lives. They're standing by while blacks are slaughtering each other," Nugent replied. "Black Lives Matter is a terrorist organization!"

Brown took the microphone and then addressed the crowd, chanting "Black lives matter too."

One man in the crowd yelled, "We didn't bring you."

Several dozen people began to chant "USA" and "All Lives Matter" and verbally berated Brown as he left the stage area.

"I love the Constitution, I love the rights it should stand for. There are people who are taking those and misconstruing them and taking them in a different direction than what it should be," Brown said.

The Black Lives Matter movement was launched in the summer of 2013 by black organizers Alicia Garza, Patrisse Cullors and Opal Tometi after George Zimmerman was acquitted of the killing of Trayvon Martin. Following George Floyd's death in Minneapolis, the movement has gained even more attention.

In an August 2020 interview with conservative author and podcast host David J. Harris Jr., Nugent insisted that Black Lives Matter is a Marxist, anti-police, radical organization that wants to tear down America, and invoked a debunked conspiracy theory that George Soros, the billionaire investor and philanthropist, is orchestrating and funding the protests over police killings of black people.

"Of course black lives matter when you take the words what they mean," Ted said. "Unfortunately, the Black Lives Matter movement has nothing to do with black lives. It's a Marxist, anti-American… And I don't even… Anarchy — obviously, their modus operandi is anarchy, but there's something much deeper and more evil about them. They wanna dismantle the only quality of life that facilitates, encourages and challenges accomplishement, excellence, dreams, entrepreneurialism and anything that has to do with the American Dream.

"So I'm afraid that I would like to say the words 'Black Lives Matter' because I mean them, but when you indentify the movement, it's just the opposite of that statement."

Nugent called the Black Lives Matter a terrorist organization and called on anyone in the crowd to challenge his opinion.


Centreville resident Jalen Brown took the mic and explained the movement. He was booed. pic.twitter.com/xhyW1vylHw