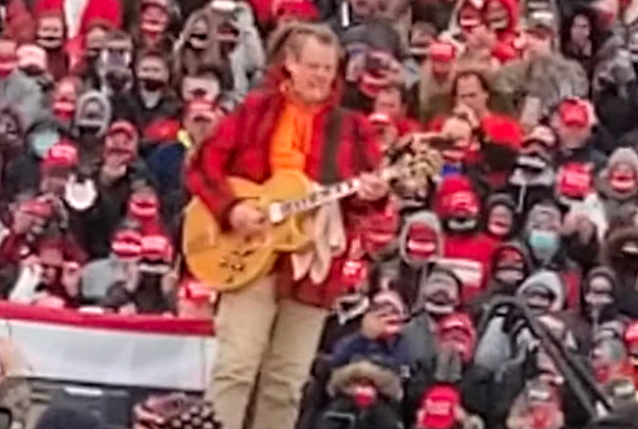 Thousands of people were in attendance at the event held at Capital Region International Airport.

"Let's make Michigan real Michigan again," Nugent declared, according to CityPulse, as he called for a moment of silence for the "heartbreak and embarrassment of what we let happen to Michigan" — possibly a reference to Gov. Gretchen Whitmer's shutdown orders in the face of the coronavirus pandemic. (Nearly 54% of Michigan voters view the Democratic governor favorably and 59% approve of the job she's doing, according to a Detroit News-WDIV-TV poll released Tuesday. Meanwhile, Trump's job approval is about 15 percentage points lower, according to the poll.)

This past July, Nugent praised Trump in an interview with "America This Week With Eric Bolling", saying that the billionaire real estate mogul is not "an entrenched, status quo, power-abusing, criminal, punk-ass politician. He's a hellraiser, working-hard, playing-hard guy that got us back to God, family, country, work ethic, independence — you know, the man in the arena," he said. "You bust your ass to be in the asset column, earn your own way, live within your means, save for a rainy day — all that radical, extreme stuff. And he's my guy — I really love this guy. He came just in a nick of time. And I'm speaking for all my huntin' buddies, all my musicians, my band, my crew, my family, my neighbors, the cops that I train with, the military heroes that I hunt with — I'm speaking for the heart and soul of this country when I talk like this."

Nugent and fellow Detroit-bred rocker Kid Rock got to spend some time in the Oval Office with Trump in April 2017. They were joined by Sarah Palin, the former Alaskan governor and GOP vice presidential nominee, who posted photos of the visit on social media the following morning. Nugent later told the Detroit Free Press that he and Kid Rock represent a salt-of-the-earth American demographic that helped Trump land the presidency.