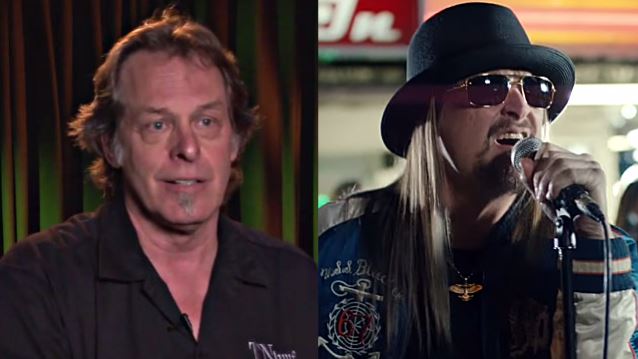 **UPDATE**: The source for this article was Ultimate Classic Rock via the satirical news site National Report. The latter site bills itself as "a news and political satire web publication, which may or may not use real names, often in semi-real or mostly fictitious ways. All news articles contained within National Report are fiction, and presumably fake news."

As it turns out, Kid Rock and Ted Nugent have **NOT** made plans to record a song together, although both have made statements in support of the Confederate flag, as highlighted in the original report.

Ted Nugent and Kid Rock have joined forces to record a song in support of the Confederate flag.

The track, titled "Kiss My Rebel Ass", will reportedly be available as an instant download from both musicians' web sites on July 17. All proceeds from the song will be donated to the American Freedom Party.

Nugent, 66, and Rock, 44, announced the collaboration during a joint appearance the two made on WWJ Newsradio 950.

"Kiss My Rebel Ass" was written and recorded after Nugent contacted Rock to express his support after Kid Rock invited anyone protesting his use of the flag at his concerts to "kiss my ass."

"When you get a text from the Nuge, you know you've done something right," laughed Rock. Nugent added: "Rock 'n' roll ain't supposed to be nice — it's supposed to hit you upside the head with a tire iron, and that is exactly what this song does."

Kid Rock described "Kiss My Rebel Ass" as "a love letter to the South and a middle finger to the PC establishment."

The Confederate flag's symbolism has been the subject of an emotional debate in the South in the aftermath of the massacre of nine blacks by a white gunman in a Charleston, South Carolina church last month.

While the state of South Carolina and major retailers across the country are officially withdrawing any connection between themselves and the Confederate Flag, Kid Rock appears to want to continue to associate himself with the controversial symbol.

Last week, the National Action Network's chapter in Michigan protested outside of the Detroit Historical Museum, which houses a Kid Rock exhibit. The Network demanded that Kid Rock stop displaying the Confederate flag at his concerts.

Kid Rock responded in a statement to Fox News: "Please tell the people who are protesting to kiss my ass."

The rocker, a native of Michigan (which was on the Union side during the Civil War), adopted the Confederate flag when his 2012 album "Rebel Soul" was released.