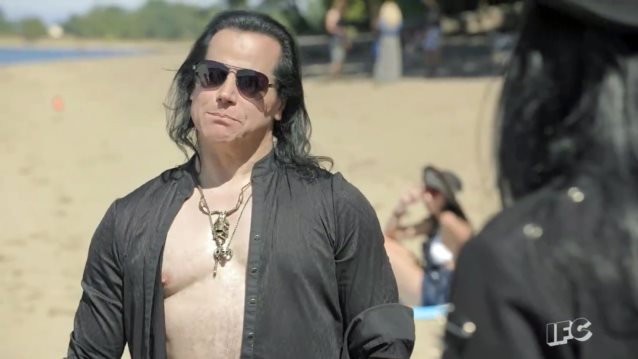 The much-anticipated episode of the IFC show "Portlandia" featuring a guest appearance by Glenn Danzig will air on Thursday, February 11.

A teaser clip for the episode is available below.

Danzig recently spoke to Las Vegas Weekly about his appearance on "Portlandia". He said: "[The filming] was a lot of fun. It was very last-minute, so I had to learn all my dialogue really quick. [Show co-creator, co-writer and co-star] Fred Armisen e-mailed me and said, 'We really, really want you to come up and do this episode; we've been trying to get in touch with you.' Actually, Rob Zombie gave them my contact info, which is kind of weird because I met Fred at Rob Zombie's birthday party. [Laughs] He was a major DANZIG fan and I'm a fan of his work also. I put Fred up there with Bill Murray and some of my other favorite comedians — Jerry Lewis, stuff like that."

Asked if he is okay making light of some of the more outlandish aspects of his style and what he has inspired, Danzig said: "That's the tough thing: When you're doing something like this, it's a fine line between it being not cool and very cool, and I think they got it. Fred and Carrie [Brownstein, show co-creator, co-writer and co-star] really got it, so it wasn't a tough decision at all. I read it and I was like, 'Yes! This is hilarious. I would love to do this.'"

He continued: "I get offered stuff sometimes that's more stupid, and this was not like that. I've seen a bunch of the 'Portlandia' episodes and they're pretty hilarious. I mean, I don't know how it's gonna turn out, but some of the comedy lines in it are just classic. The whole premise of the episode I'm on is just hilarious."

In an interview with RollingStone.com, Brownstein stated about Danzig's "Portlandia" shoot: "He was amazing. We've had a lot of guest stars on the show, including people that are arguably more famous than Danzig, but I've never seen a collective enthusiasm greater than when we had him on set. He's really smart, and very Jersey — and he can make fun of himself, which is one of the most endearing qualities for anyone in this day and age of incessant narcissism and solipsism."

Portlandia: Weirdos Go To The Beach

When you're at the beach you can never have too much Hurley. All new Portlandia Thursday 10P on IFC

Posted by Portlandia on Monday, February 8, 2016