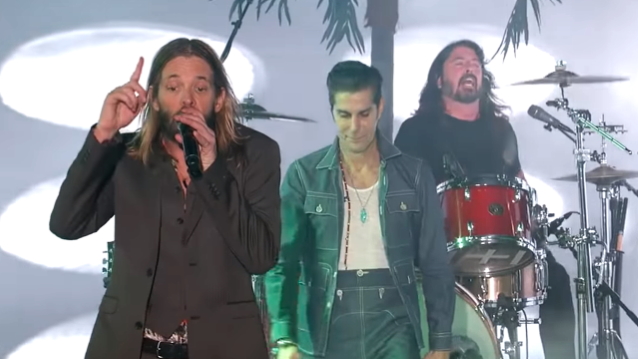 TAYLOR HAWKINS & THE COATTAIL RIDERS were the musical guests on last night's (Tuesday, January 7) episode of "Jimmy Kimmel Live!" They performed two songs — "Middle Child" with Dave Grohl on drums, and "I Really Blew It" with Grohl and special guest Perry Farrell of JANE'S ADDICTION.

"Middle Child" and "I Really Blew It" are taken from TAYLOR HAWKINS AND THE COATTAIL RIDERS' latest album, "Get The Money", which was released in November via Shanabelle/RCA Records. Produced by John Lousteau and Taylor himself, and mixed by Sylvia Massy, the disc follows Taylor's 2016 six-song mini-LP "KOTA" by three years almost to the day, and features a scope far wider than "KOTA"'s takes on suburbia's bizarro underbelly. The new album finds Taylor, Chris Chaney (bass) and Brent Woods (guitar) and Lousteau accompanied by an all-star supporting cast including Grohl and Pat Smear, Roger Taylor, Joe Walsh, Duff McKagan, Nancy Wilson, Chrissie Hynde, Perry Farrell, LeAnn Rimes and more, collectively creating a staggering, epic sprawl that swerves from classic rock to prog and glam and all points between.