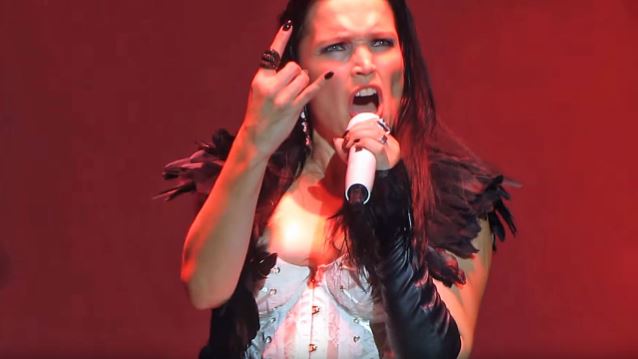 PlanetMosh recently conducted an interview with former NIGHTWISH frontwoman Tarja Turunen. An excerpt from the chat follows below.

PlanetMosh: Most bands or singers release one album at a time, but you've chosen to release two albums in the space of two months. Why did you choose to do it as two albums rather than one double album?

Tarja: "I really didn't want to do a double album because I think that as I'm challenging my audience with my music being so diverse, so I felt it would be too much — too many tracks. But I ended up writing songs, so many songs that in the end, when I had all those songs in front of me, I said, 'Now what?' I didn't want to keep them for bonuses, for B-sides, anything like that because I've had that experience before — they get kind of lost, and they're part of you, they're your creations, you feel personal to them and there is a connection, so I really didn't want to have that going on. So I discussed with the label people in Germany, and said, 'Shouldn't we do an EP or something like that, something special? I want to have a real product to have, because these songs were written for one album, but I became productive one way or another, so what to do?' They said, 'Let's make two albums, and call it a prequel,' which, of course, is a nicer way to tell it, and it's kind of a connection to my love of film music and films in general, but it gives you the sound of the album that is still to come, and it also as the themes on the albums are handling more or less opposites of the things we have in life, so 'The Brightest Void', for me, is presenting the lighter side of the shadow."

PlanetMosh: I'd noticed with the titles you have, "The Brightest Void" and "The Shadow Self", so there's that light and dark connection, and I'd wondered if the albums would actually be themed that way too.

Tarja: "Very much so. I've gone through some kind of self-discovery in recent years. I'm still on that journey, and as an artist, I think that kind of self-discovery will never change because you meet new people and the more you travel, the less you know. I think it was John Lennon who said something like that many years ago. It really is very true that the more you do, the less you know. I try to keep myself very open-minded in that sense. It's opposites — love/hate, negative/positive, shadows/light — in shadow there is always a certain amount of light, and vice versa, and in myself I have felt there is a certain darkness in me but I have never really understood what is this darkness in me because I consider myself being a very positive person and I love talking with people, socializing; I'm a happy camper, I'm not a sad person, but when it comes to music, it comes out with melancholic melodies. It comes out as dark mystic things, mysterious things, and I love that. When I was writing songs for this album I read an interview of Annie Lennox where she was saying the shadow self is within us as artists, as the creative force, making us create art, and it really hit me, that is the shadow…my own shadow. I feel very positive but it makes me create dark things, so I really discovered a lot about myself through that interview — it hit me hard, so I'm grateful that she made it really clear to me."

PlanetMosh: You sound as though you're really challenging yourself vocally on the albums. I'd imagine the rock stuff is very different to do than the classical music you trained on.

Tarja: "It is a challenge, but I love the challenge. When I write songs, I usually write too difficult melodies, but again there's a challenge. It comes in songwriting, it comes in a way where I don't want to go where the level is lowest. I'm a workaholic in that sense, and nowadays having an international career, it's a huge puzzle I need to keep organized; otherwise, it would be a mess, but I've been able to do that passionately able to do that because I work so goddamn hard, and being a vocalist, it's so vital for me still to go on with that practice and training and I hope that will never ever change, because when I go back it to an opera aria, for example, I sing an aria without problems it's a huge satisfaction it gives me."

Read the entire interview at PlanetMosh.