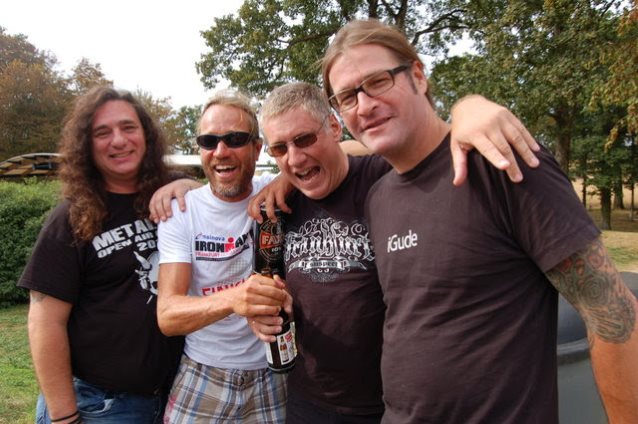 German alcohol-soaked thrash metal act TANKARD has set "One Foot In The Grave" as the title of its new album, tentatively due late spring/early summer via Nuclear Blast. The follow-up to 2014's "R.I.B. (Rest In Beer)" is being recorded at Gernhart Studios in Troisdorf with producer Martin Buchwalter (DESTRUCTION, ACCUSER, PERZONAL WAR, SUIDAKRA). Guitars, bass and drums are already done, and TANKARD frontman Andreas "Gerre" Geremia is currently laying down his vocals on the soundtrack to the band's 35th anniversary.

He said: "At the moment I have seven songs ready!

"It's a great pleasure to work with Martin for the very first time! He really kicks my ass, so I have a lot of work! So I really look forward to a great result to celebrate our 35th birthday in a reasonable way!

The cover artwork for "One Foot In The Grave" will be created by Patrick Strogulski, who is a student of Sebastian Krüger, the recent artwork designer of TANKARD.