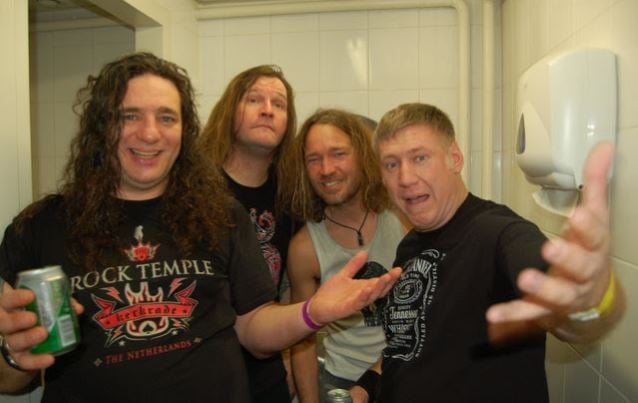 Olaf Zissel, drummer for German beer lovers and cult thrashers TANKARD, has been admitted to the hospital following a suspected stroke. He is said to be "doing well," considering the circumstances, and will undergo tests by a team of doctors over the course of the next few days. As a result, he won't be able to accompany his bandmates to the Summer Breeze and Motocultor Fest festivals in Germany and France, respectively. Filling in for him will be Gerd Lücking (HOLY MOSES), who has previously served as a soundtech for TANKARD.

Comments TANKARD: "We're shocked and are keeping our fingers crossed for Olaf [so] that he will be released from the hospital soon. We [hope] that he will get well soon and fast. And we want to thank Gerd, who [agreed on] short [notice] to play these shows with us."

TANKARD's latest album, "R.I.B. (Rest In Beer)", entered the official chart in the band's home country at position No. 41.

The video for the "R.I.B. (Rest In Beer)" title track can be seen below. The clip was filmed in March 2014 under the direction of Jan Öhlenschläger in Frankfurt.