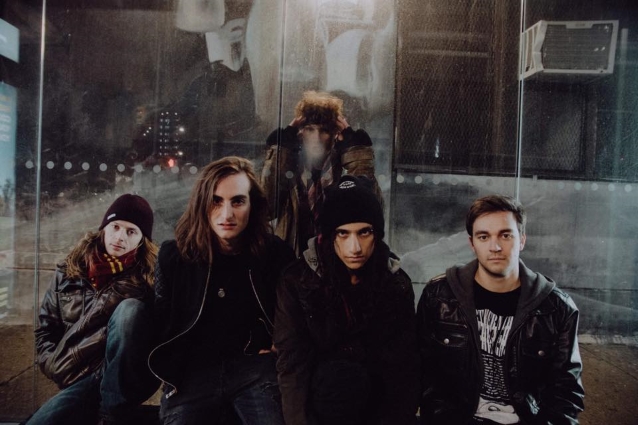 Pennsylvania metal band TALLAH — which features in its ranks Max Portnoy, son of Mike Portnoy (DREAM THEATER, AVENGED SEVENFOLD, THE WINERY DOGS, SONS OF APOLLO) — has inked a deal with Earache Records. The group's full-length debut will be released later in the year.

Mike tweeted out the signing news, writing: "Congratulations to @MaxPortnoy_ & @tallah__ for signing with @EaracheRecords !! What a great fit. I see great things ahead for these guys...their live show is OFF THE HOOK!!!"

TALLAH's latest EP, titled "No One Should Read This", came out last year. At the time, the effort was described in a press release as consisting of "five uniquely different songs with a new age, hardcore influence."

TALLAH is comprised of Justin Bonitz on vocals, Andrew Cooper on bass, Derrick Schneider on guitar, Eric Novroski on guitar and Max Portnoy on drums.

Last year, Max told 100 Percent Rock Magazine about TALLAH's musical direction: "I don't like putting a genre on something. It makes people think you're confined to one specific sound whereas I want to be confined to my own sound. I've heard people say we have a nu-metal sound to us and I agree, but at the same time, I've heard people say we have our own unique sound to us. I think we have a heavy influence from nu-metal, but we add our own unique take on it and draw influence from other styles like hardcore. The stuff is heavy, weird, and pretty out there, which is what we love. We want to try things out of the box. Whether it's the vocals, the arrangements, the different riffs or noise we use, we try to do something in each song that stands out and is very discernible that it is TALLAH."