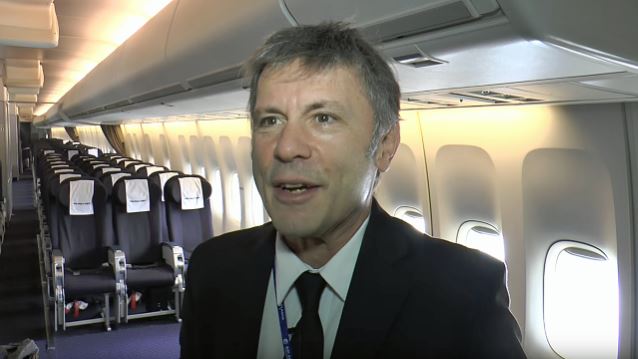 A one-and-a-half-minute video clip offering a rare look inside IRON MAIDEN's Boeing 747 plane — introduced by the band's lead singer and chairman of Cardiff Aviation, Bruce Dickinson — is available below.

The video gives a glimpse of what goes on inside the aircraft, which is equipped to carry more than 10,000 kg of equipment — and it has Dickinson at the controls.

The clip includes footage of the band taking off from Vancouver, Canada, and flying to Everett, Washington.

In the video, Bruce says: "It's such a beautiful airplane. This machine enables us to do a European itinerary on an intercontinental basis. It's our time machine — our magic carpet."

The Boeing 747 was back in the air in late March after a ten-day emergency repair mission following a ground accident in Santiago, Chile. The incident required the replacing of both of the Boeing 747's port side jet engines, a tough proposition at the best of times but not made any easier by the fact of the distances involved in getting such huge components, parts, tools and technical crew to Chile as quickly as possible to get Ed Force One flying again.

Ed Force One is leased from Air Atlanta who went into immediate action following the incident, with technical assistance from Boeing. An emergency meeting was called to create a comprehensive detailed plan for this complex operation — locating suitable engines, thrust reversers, cowlings and parts, working out necessary tooling and technical team, logistics of ground and freight transport and tech team travel and a myriad of other detail. The next couple of days were spent putting these plans meticulously into place.