U.S. rockers TAKARA will release their sixth album, "Invitation To Forever", on October 31 in Europe via SPV Records, and November 16 for the U.S. and the rest of the world through ProgRock Records. The LP will also be available directly from the band via its web sites and through all digital music stores.

Commented founder/guitarist Neal Grusky: "The lineup for the new TAKARA album is Gustavo Monsanto (REVOLUTION RENAISSANCE) on vocals, Neal Grusky on guitar, Björn Englen (YNGWIE MALMSTEEN) on bass, and Patrick Johansson (YNGWIE MALMSTEEN) on drums and Brook Hansen on keyboards. This album also features an extraordinary reunion of Jeff Scott Soto on back-up vocals. It has been about 10 years since Jeff has last appeared on any TAKARA album."

Grusky added, "This album will be a bit different than past TAKARA albums. 'Invitation To Forever' will be a little bit heavier and have more edge than previous TAKARA albums, while still yet retaining the trademark distinctive TAKARA melodic rock. This is a very exciting album. Many fans will discover our new hidden gem on vocals, Brazilian vocal sensation Gustavo Monsanto. He will carry TAKARA like his predecessors before him in true traditional TAKARA form and style. We will also have on the album as a tribute to the 20-year anniversary of the original formation of TAKARA a remake of our song 'Spotlight' which was on the first album 'Eternal Faith'. This was the song that started it all for TAKARA." 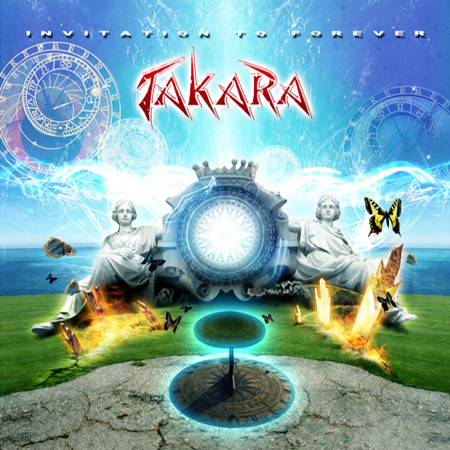