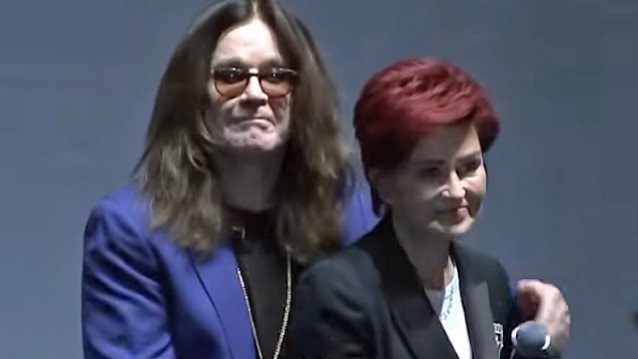 According to U.K. weekly tabloid newspaper Sunday Express (via Radar Online), Ozzy Osbourne has been ordered by his wife and manager Sharon to check in to a sex rehab facility previously attended by pro golfer Tiger Woods.

Sharon is reportedly considering pulling the plug on her marriage to the BLACK SABBATH singer because she believes he has been cheating on her with a celebrity hairstylist.

The Sunday Express claims that Ozzy is being treated at the Pine Grove facility in Hattiesburg, Mississippi,

Seven On Your Side reached out to Pine Grove representatives about Ozzy's supposed attendance in the program — called "Gratitude" — and was given the following statement: "We cannot confirm or deny that any patient is receiving treatment at our facility."

Sharon addressed her split from Ozzy during a May 10 appearance on "The Talk". The 63-year-old admitted to kicking her hubby out of the house but explained that he has since moved back in and she has decided to leave.

Sharon walked on-set with a glass of lemonade as a nod to Beyoncé's recent album about her husband's cheating. Sharon told her co-hosts, "It's right for me because I, honestly at this point today, have no idea what I am going to be doing for the rest of my life. I don't know where I am going, who I'm going with and I just need time to think and really think about myself and what I really want for the rest of my life."

She also admitted that she doesn't know if she and Ozzy will stay married because she hasn't figured out what she wants yet. She also acknowledged that she loves her husband for the life and children that he has given her.

At last week's Ozzfest Meets Knotfest press conference in Hollywood, Ozzy stated about Sharon (see video below): "She's a remarkable woman to put up with me."