A diverse group of famed musicians, including Peter Gabriel, THE POLICE's Stewart Copeland, Rick Allen of DEF LEPPARD, SYSTEM OF A DOWN frontman Serj Tankian and Grammy Award-winning opera singer Sasha Cooke, have come together for a first-of-its-kind benefit album to deliver urgent humanitarian aid to Palestinians in Gaza. Produced by Project Peace On Earth (PPOE), the album features 26 powerful musical tracks of healing and peace.

Peter Gabriel says of his decision to participate: "Although I am sure both the Palestinian and Israeli people would benefit enormously from a just and fair two-state agreement based around the '67 borders, we have watched the Palestinians subjected to more and more suffering for far too long, especially in Gaza. Meanwhile their long held land is repeatedly stolen by force for illegal settlements. I am not and have never been anti-Israeli or anti-Semitic; I am anti-Israeli government policy, anti-injustice, anti-oppression and anti-occupation.

"There is clearly a growing movement around the world willing to speak out, including my own country's Parliament. I am happy to be one of these voices now asking the Israeli government, 'Where is that two state solution you have so long said you wanted?' and more simply, saying, 'Enough.'"

Serj Tankian adds that "helping to rebuild the lives of Palestinians in Gaza is a necessary and noble worldwide humanitarian prerogative that we must not shy away from. It's the least we can do for a people that have suffered under an occupation, embargo, and invasion."

Steve Robertson, PPOE founder and executive producer of the album, has conducted several awareness-raising peace projects in Palestine. He says that "2 Unite All" was inspired by a report he saw about a young Palestinian girl who was in a coma from the bombing. "The doctors weren't sure if she would survive, but said if she did regain consciousness, she would learn that her mother, father and sister had all been killed," says Robertson. "My tears wouldn't stop and I said to myself, 'That's enough. I have to do something now and offer some sort of healing support to the people of Gaza and this Middle East crisis.'"

Robertson called on acclaimed Indian composer Ricky Kej to produce the album, and he immediately accepted. "I just knew how important it was for me, and all people, to help bring awareness and an end to the suffering of the people of the Holy Land," Kej says.

With over 2,100 people dead, more than 3,000 children injured, and over 370,000 Palestinian children in Gaza left traumatized after this summer's assault, "2 Unite All" proceeds will go directly to support the surgical and medical teams of Palestine Children's Relief Fund (PCRF) and the vital psychological counseling supported by UNRWA USA. PPOE will also lead a PTSD therapy effort with renowned psychotherapist Dr. Edward Tick and continue its peace initiatives in the Holy Land.

"Our music may not be able to rebuild homes nor bring back victims of violence, but at least it can soften hearts," says Stewart Copeland. "Hard hearts allow violence in the Holy Land and softening up allows persuasion. Even the most flinty realpolitik analysis shows that 'Kumbaya' is more credible than 'They Must Go.'"

Rick Allen of DEF LEPPARD says, "Our world is finally focusing on resolving this conflict. Too many lives have been lost and too many innocent children and families remain perilously injured." Lauren Monroe, Allen's wife and songwriting partner, adds, "The beautiful people of Palestine require the world's immediate medical support. Contributing a song to help bring necessary healing and resources to Gaza was the least Rick and I could do." Allen concludes, "I'm encouraging all DEF LEPPARD fans to buy a copy of '2 Unite All' and support this cause."

The "2 Unite All" album, which features cover art from renowned illustrator Greg Spalenka and was made possible with the assistance of TuneCore distribution, is available for purchase at www.2UniteAll.com. 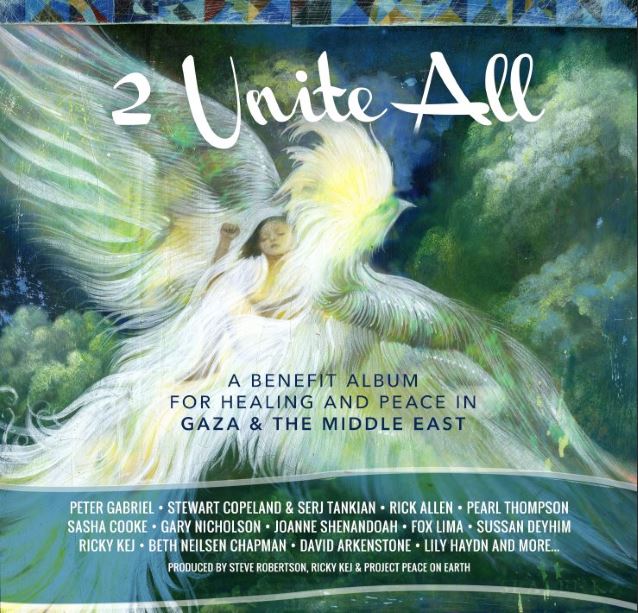