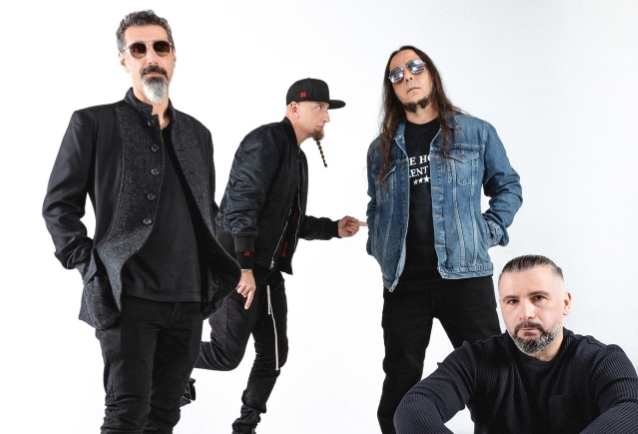 It's been 15 years since the Grammy-winning, multi-platinum-selling SYSTEM OF A DOWN, one of the most beloved rock bands in the world, released new music. For years, fans and press speculated about this, and of late, the rumor mill has gone into overdrive hypothesizing when the band might return to the studio. Today, motivated by the recently erupted conflict between Artsakh and Azerbaijan, the latter aided by Turkey and accountable for the greatest violence the region has endured in 26 years, SYSTEM OF A DOWN — Daron Malakian (guitars, vocals), Serj Tankian (vocals), Shavo Odadjian (bass) and John Dolmayan (drums) — announces the release of its first new songs in 15 years: "Protect The Land" and "Genocidal Humanoidz". Produced by Malakian, who also wrote the music and lyrics, both songs are streaming now on all DSPs and are available for purchase on Bandcamp with band royalties earmarked for the Armenia Fund.

So why now? Last month, profoundly affected by the unwarranted surprise attacks and bombings of civilians perpetrated by Azerbaijan and Turkey (Turkey was responsible for the genocide of 1.5 million Armenians in 1915 as well as over 100 years of denial), Dolmayan texted his three bandmates.

Said Dolmayan: "I texted, 'no matter how we feel about each other, no matter what issues linger from the past, we need to put them aside because this is bigger than SYSTEM OF A DOWN and bigger than all of us.....we need to do something to support our people.'" Joined together on a subsequent conference call, everyone voiced the same concern and the vital importance of helping in some way, the way they knew best — music.

"The aggression and injustice being perpetrated against the Armenian people in Artsakh and Armenia by Azerbaijan and Turkey is a human rights violation and a war crime," said Tankian. "All of us in SYSTEM realize this is an existential battle for our people, so this is very personal for us. What we need right now is for the world to put politics aside and support Armenia by sanctioning Turkey and Azerbaijan and recognizing Artsakh."

Today, SYSTEM OF A DOWN also releases the music video for "Protect The Land" that incorporates recent footage of the protests and on-the-ground fighting in Artsakh, but in a very personal and aesthetic way. As he did for all previous SYSTEM OF A DOWN releases, Odadjian executive-produced the music video and curated the cover and brand art for the project. "I wanted to show the unification of our people around the world for one common cause, illustrating the power in numbers," he said, "so we brought together people from all ages and professions who believe in and are fighting for that same cause. It's one thing to come up with an idea, but to see it come alive as happened with this video, has been just incredible."

On the recording of "Protect The Land" and "Genocidal Humanoidz", Odadjian added: "It was such a pleasure for us to be together in the studio again, very comforting and natural, like no time had passed at all."

In announcing the release of the new songs, SYSTEM OF A DOWN explained in a statement: "We as SYSTEM OF A DOWN have just released new music for the first time in 15 years. The time to do this is now, as together, the four of us have something extremely important to say as a unified voice. These two songs, 'Protect The Land' and 'Genocidal Humanoidz' both speak of a dire and serious war being perpetrated upon our cultural homelands of Artsakh and Armenia.

"On September 27, the combined forces of Azerbaijan and Turkey (along with Isis terrorists from Syria) attacked the Republic of Nagorno-Karabakh, which we as Armenians call Artsakh. For over the past month, civilians young and old have been awakened day and night by the frightful sights and sounds of rocket attacks, falling bombs, missiles, drones and terrorist attacks.

"They've had to find sanctuary in makeshift shelters, trying to avoid the fallout of outlawed cluster bombs raining down on their streets and homes, hospitals and places of worship. Their attackers have set their forests and endangered wildlife ablaze using white phosphorus, another banned weapon.

"Because over 30 years ago in 1988, the Armenians of Nagorno-Karabakh (which at the time was an Autonomous Oblast within the USSR), were tired of being treated as second class citizens and decided to declare their rightful independence from the Azerbaijan Soviet Socialist Republic whose borders engulfed their own.

"This ultimately led to a war of self determination by Armenians in Karabakh against Azerbaijan that ended in a cease fire in 1994, with Armenians retaining control of their ancestral homelands and maintaining their independence to the present day. Our people have lived there for millennia, and for most families there, it's the only home they and their forefathers and mothers have ever known. They just want to live in peace as they have for centuries.

"There is an immediate need for global citizens to urge their respective governments to not only condemn the actions of the corrupt regime leaders of Azerbaijan and Turkey, but to also insist world leaders act with urgency to bring peace to the region and rightfully recognize Artsakh as the independent nation it is.

"Most importantly and urgently, we humbly implore you to donate, in sums small or large to provide desperately needed aid and basic supplies for those adversely affected with what are ever growing accounts of crimes against humanity.

"We realize that for many of you, there are more convenient ways you like listening to music, so please consider the opportunity to download these songs as an act of charity above all else. The music and lyrics speak for themselves. We need you to speak for Artsakh."

In a new interview with Rolling Stone, Malakian stated: "If we don't do this, there isn't any other huge Armenian rock band out there that's gonna do this. There aren't that many big Armenian celebrities out there that are going to do this. It's kind of a duty. We came together because our country needed us, not necessarily because we're so amped to do a brand-new SYSTEM OF A DOWN song. Our people needed us to do this."

"Protect The Land" a was originally written by Malakian for the next album by his other group, SCARS ON BROADWAY, while "Genocidal Humanoidz" was penned three or four years ago when Malakian, Dolmayan and bassist Shavo Odadjian convened for a jam session that produced several songs, only to abandon them when Tankian wouldn't commit to an album.

For the time being, there are no plans for SYSTEM OF A DOWN to record any more new material.

"If it was up to me, we'd have a new album every three years," Dolmayan said. "But things aren't up to me. I'm at the mercy of my team, and although I fought for it for many years with band members, I've accepted that it is what it is. We do have five albums and [now] two songs. We've accomplished a lot in our careers. If it ends at that, so be it."

We as System Of A Down have just released new music for the first time in 15 years. The time to do this is now, as...