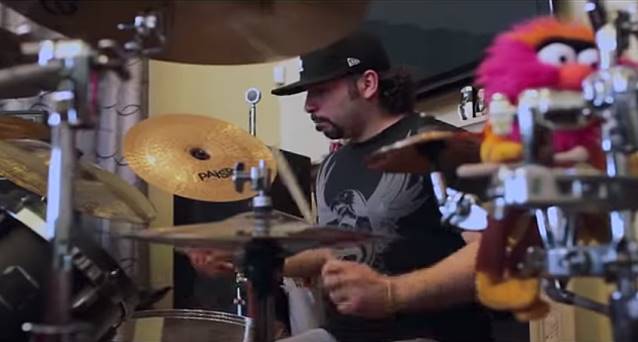 SYSTEM OF A DOWN drummer John Dolmayan said in a recent interview that he is "not really happy with where the band is right now," indicating that it's been far too long — eight years — since they released a new album. The Pulse Of Radio asked Dolmayan what exactly has caused such a long delay. "You know, there's still some drama from the past that we've got to figure out, and the funny thing is that we get onstage, we have a great time," he said. "The last couple of tours have probably been the most fun we've ever had, but I'm a very honest guy. You know, there's problems in this band. But they're problems that can be figured out and we're in the process of doing that. We probably would have been in the studio making an album already, but for personal reasons, one of our members cant be in the studio right now. It's a positive thing, but that's all I can say on that right now."

SYSTEM OF A DOWN last released new music in 2006 with the "Mezmerize" and "Hypnotize" albums, but despite starting to tour again in 2011, the group has not shown any signs of returning to the studio.

Dolmayan said last week that he and his bandmates have been communicating "more and more," but admitted that there are still "barriers" which "we can't seem to get past."

Dolmayan has recently launched a Kickstarter campaign to fund the recording of an album by his new project, THESE GREY MEN, on which he plans to record covers of popular songs with a selection of guests artists.

The drummer told The Pulse Of Radio he's got 16 songs selected for the recording sessions and has tentatively lined up 20 musicians to participate, including the other three members of SYSTEM.

Dolmayan has set a goal of $55,000 for the project, which has raised nearly $15,000 so far with 37 days to go. He's offering a variety of incentives for all contributors, ranging from a digital download of the album for people who donate $10 to $10,000 for a night out with Dolmayan in Las Vegas.