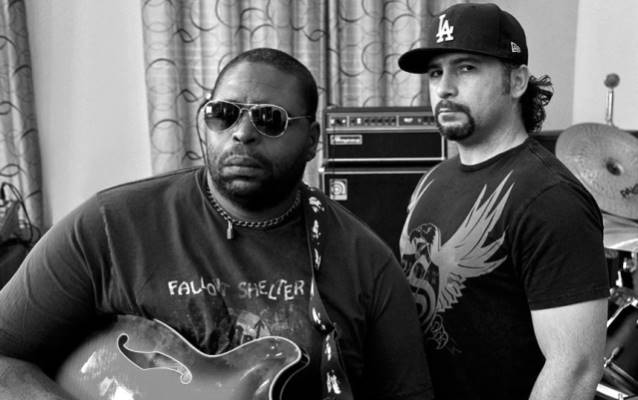 John Dolmayan, drummer for Grammy-winning alt-rock band SYSTEM OF A DOWN, launched a Kickstarter campaign today for THESE GREY MEN, a project that will produce a star-studded covers album and tour.

The album will include new renditions of songs by artists such as RADIOHEAD, OUTKAST, DAVID BOWIE and many more, recorded by a band of all-star players (lineup to be announced) led by Dolmayan and his collaborator James Hazley, formerly of the band COCKEYED GHOST.

"I'm a huge music fan and have an iPod with over 10,000 or so songs on it that I listen to religiously," says Dolmayan. "I often rearrange melodies in my head or think about how much fun it would've been to play on some of my favorite songs. That ultimately led to the idea of a covers album. As for what it’s going to sound like, it'll definitely have a rock feel, but not limited by any genre restrictions. Listeners are going to hear a plethora of sounds and styles."

The project sees Dolmayan offering various investor incentives, ranging from personal drum lessons and an opportunity to attend a recording session to a private backyard concert and a chance to guest-produce one of the album's tracks.

Rewards also include watching the creative process in the studio via Skype, owning instruments used during the recording, receiving credit in the album's liner notes, and more.

"I want this project to be an experiment, not just in sound, but in the mutual participation of artist and fan," he says. "I want this to be a shared process. The goal is not just to deliver a finished product, but to give fans a piece of the project every step of the way."

SYSTEM OF A DOWN last released new music in 2005 on the "Mezmerize" and "Hypnotize" albums, going on hiatus the following year.

The band reunited in 2011 for touring purposes and spent last summer on a European festival circuit, while performing only one North American show in 2013 at California's famed Hollywood Bowl.

SYSTEM OF A DOWN singer Serj Tankian in 2012 had a message for the band's fans waiting for a new album: don't hold your breath. In an interview with Loudwire, Tankian explained, "We haven't made plans of recording the new record as of yet. When we do, everyone will know. We haven't really discussed another record as of now with any of the guys, really. It's something that, when it's the right time, we'll do it. Right now I'm busy with my own stuff and that's gonna take me a bit, but when it's the right time, everyone will know. I don't even want to say there's [a new SYSTEM album] coming because we haven't really talked about it."

Tankian told Loudwire that SYSTEM's recent tours have been a "blast," adding, "I think we've played better because of it. There was new excitement in playing together and all of the shows have been really great. Everyone's told us that we sound better than we did in 2006 when we left off, so I think it's great."