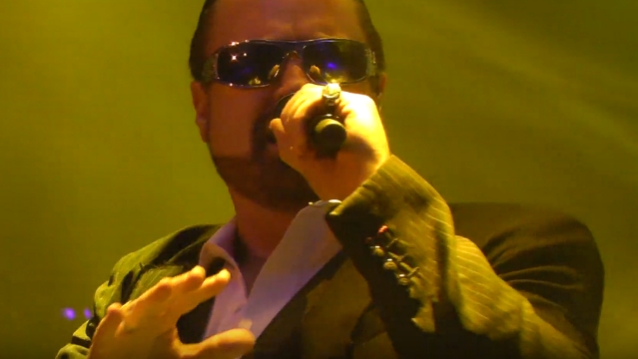 SYMPHONY X vocalist Russell Allen "slipped and fell" during rehearsals for this year's TRANS-SIBERIAN ORCHESTRA tour. As a result, he may miss some or all of the dates on the "TSO East" portion of the 2019 holiday trek, "Christmas Eve and Other Stories", which will kick off on November 13 and conclude on December 30. The tour brings to life TSO's 1996 debut album of the same name, and the first in its Christmas-themed trilogy, which includes 1998's "The Christmas Attic" and 2004's "The Lost Christmas Eve".

TSO revealed Allen's injury in a Facebook post earlier today. The band wrote: "We are here in the midwest preparing to give you one of the most exciting TSO productions you have ever seen. During rehearsal, Russell Allen slipped and fell. Russell is in good spirits but in a bit of pain. We are doing everything necessary to assure Russell is taken care of. We hope he is able to make it out on the road in the near future but our concern is that he rests so he can make a full recovery."

Back in July 2017, Allen was involved in a road accident that resulted in the death of his ADRENALINE MOB and TRANS-SIBERIAN ORCHESTRA bandmate, bass player David Zablidowsky. Russell escaped with minor injuries and returned to the stage with TSO in November of that year.

"Christmas Eve And Other Stories", from TSO's late founder, composer/lyricist Paul O'Neill, tells the tale of a young angel who is sent to Earth to discover the good of humanity. The story celebrates such themes as "strangers helping strangers" and "the kindness of others," as it takes listeners around the world.

Since its historic touring debut, TSO has played nearly 2,000 winter tour shows for more than 16 million fans, with tour grosses of more than $725 million, and has sold in excess of 12 million albums and DVDs. Year after year, TSO hits the upper reaches of the domestic and worldwide tour charts. Recently in July 2019, TSO was ranked No. 6 on Pollstar's North American Tours Mid Year chart and No. 8 on Pollstar's Worldwide Tours Mid Year chart. In 2018, TSO came in at No. 16 on Pollstar's 2018 Top 200 Year End North American Tours and at No. 17 on Pollstar's 2018 Year End Worldwide Ticket Sales Top 100 Tours chart with more than 925,000 tickets sold. Additionally, in July 2019, TSO was featured in Billboard's Money Makers of 2018. In 2009, Pollstar ranked TSO at No. 20 on the "Top Tour(s) of the Decade" and Billboard placed TSO at No. 25 on its "Top Touring Artists of the Decade."

We are here in the midwest preparing to give you one of the most exciting TSO productions you have ever seen. During...