The book was translated by Bart Donarski (who also translated "Choosing Death: The Improbable History of Death Metal & Grindcore" by Albert Mudrian), a contributor to well-known Polish magazine Mystic Art, DJ of the longest-running metal radio show in Poland "Thrashing Madness", and editor of the major Polish Internet portal Interia.pl.

The ultimate insider's account of the rise of the Scandinavian metal scene, "Swedish Death Metal" boasts over 450 pages, over 500 images, and is based on candid interviews with members of NIHILIST, ENTOMBED, IN FLAMES, AT THE GATES, DISMEMBER, GRAVE, GROTESQUE, HYPOCRISY, UNLEASHED, MARDUK, MORBID, MOB 47, DERANGED, EDGE OF SANITY, NIRVANA 2002, LIERS IN WAIT, MERCILESS, CARNAGE, CARCASS, TREBLINKA, TIAMAT, OPETH, THE HAUNTED, along with many other central characters, including fanzine writers, radio hosts, and promoters.

According to a press release, "Swedish Death Metal" is "the improbable history of how a marginalized teen movement crawled from Sweden's small towns and suburbs, and found a lasting place on the world stage. Daniel Ekeroth captures the epic tale with enlightening detail, beginning with Sweden's violent loss of innocence in the 1980s, depicting metal's chokehold on the country during the 1990s, and illustrating the lasting legacy and influence in the turbulent 2000s of the Sunlight guitar tone, the 'Gothenburg Sound,' and countless other offshoots of Sweden's most lethal cultural export."

The book features original cover artwork by Nicke Andersson (NIHILIST, ENTOMBED, THE HELLACOPTERS), and an introduction by death metal pioneer Chris Reifert (AUTOPSY, ABSCESS, DEATH). The highly-regarded first edition has been out of print since earlier this year. In February 2007, "Swedish Death Metal" reached position No. 1 on the AdLibris sales charts in Sweden for the month of February for non-fiction books in a foreign language.

Reaction to "Swedish Death Metal" from Chris Reifert: "Read this book if you are willing to be subjected to the story behind the extreme face-melting, flesh-ripping, ear-slaying, gut-blasting phenomenon known as Swedish death metal!"

From Tomas Lindberg (GROTESQUE, AT THE GATES, DISFEAR): "Finally, the true story of Swedish death metal! This book brought me back to the good old days."

From Nicke Andersson: "Death metal ruled my adolescent years. The problem is I don't remember half of it. This tome of dark recollections is the chance to set things straight."

For more information, or to pre-order the book, go to this location.

In a brief new video tutorial, Daniel Ekeroth, author of "Swedish Death Metal" (and bassist of TYRANT and INSISION), breaks down and demonstrates the classic Swedish death metal guitar sound invented by Leif Cuzner of NIHILIST and perfected at Studio Sunlight in Stockholm on albums by ENTOMBED, DISMEMBER, and countless others. The two-minute clip can be viewed below. 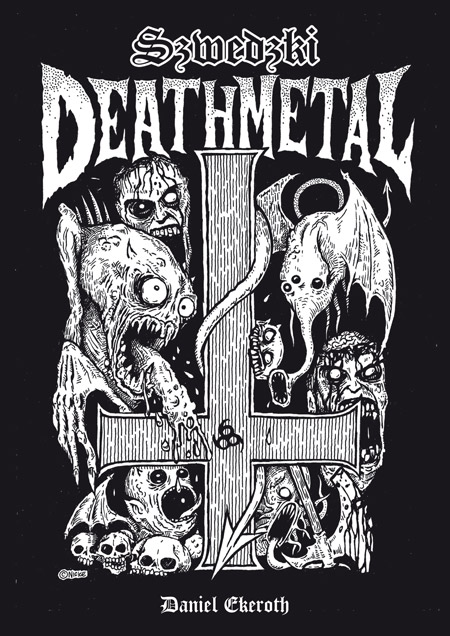