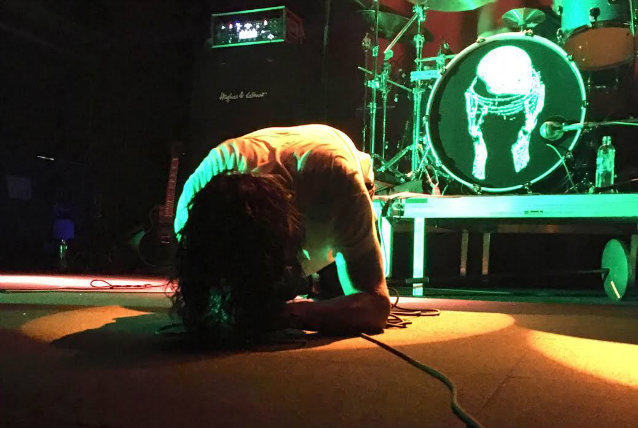 Seventeen years after the release of its critically acclaimed third album, "Your Vision Was Never Mine to Share", Swedish industrial band MISERY LOVES CO. is back with a new song. Patrik Wirén and Örjan Örnkloo, the duo who formed the band in 1992, started working together again soon after the split. Already in 2005, the two got back to doing what they always did, which is writing the music they love. And now (finally!) they are ready to meet the outside world again.

MISERY LOVES CO. released its self-titled debut in 1995 (a year earlier in Scandinavia) and soon became one of Europe's most talked-about up-and-coming metal bands. With songs like "My Mind Still Speaks" and "Kiss Your Boots", they managed to mix aggressiveness with melody and innovativeness with an impressive songwriting. Both audience and critics took the band to their hearts and perhaps Metal Hammer said it best: "If someone were to prescribe a formula for how metal should sound in 1995, it could be described in three words — MISERY LOVES CO."

The year 2000 saw the band release its last album, "Your Vision Was Never Mine To Share", which was a huge step for the band musically. The dynamic of songs like the title track and "On Top of The World" were more impressive than ever and the band progressed in a very exciting artistic direction. Still, just a few months later, the band split-up and the world became an inferior place.

There is no strategy, no big corporate machine. It's just Patrik, Örjan and Michael Hahne, the guitar player who can be heard on "Your Vision Was Never Mine To Share", wanting to play their songs again for all the beautiful friends of MISERY.

In 2016 the band exploded on the main stages at Gefle Metal Festival (Sweden), Bloodstock (U.K.) and Brutal Assault (Czech Republic) and has since then done club shows in Stockholm, Gothenburg and Uppsala. Earlier this year, they also boarded the world's biggest metal cruise, 70000 Tons Of Metal. On every show since they got back together, they have played a new song, the instant MISERY classic "Would You?", which always went down exceptionally well with the audience. The song, which has been mixed by Roberto Laghi (IN FLAMES, MUSTASCH), is MISERY LOVES CO.'s first release in seventeen years.

"Would You?" is now available digitally from Bandcamp.