SWALLOW THE SUN, the Finnish atmospheric doom/death metal outfit from Finland, has released the following statement:

"Unfortunately, [drummer] Kai [Hahto] is unable to do 'The Morning Never Came' anniversary gigs this fall, but on short notice we managed to get hold of a fantastic drummer, Juuso Raatikainen, to fill Kai's giant shoes for these shows. Kai will be back on his throne for the 70000 Tons Of Metal and Mexican shows."

SWALLOW THE SUN's upcoming tour celebrates the tenth anniversary of the band’s first studio album, "The Morning Never Came", originally released back in 2003, and now available via Spinefarm.

Support on the trek will be provided by ambient rock band ANTIMATTER (United Kingdom) and gothic metallers THE FORESHADOWING (Italy).

SWALLOW THE SUN's fifth full-length album, "Emerald Forest And The Blackbird", entered the official chart in Finland at position No. 2. Released on February 1, 2012 via Spinefarm Records, the CD was recorded during September and October 2011 by Mikko Karmila (NIGHTWISH, AMORPHIS, CHILDREN OF BODOM) at Drumforest Studios in Viitasaari and Sonic Pump 2 in Helsinki, and by Hannu Honkonen at Noisework Studios in Helsinki. The effort was mixed by Hiili Hiilesmaa (HIM, APOCALYPTICA, AMORPHIS, MOONSPELL) and was mastered by Mika Jussila (NIGHTWISH, AMORPHIS, SENTENCED) at Finnvox Studios. The artwork was once again created by Rami Mursula. 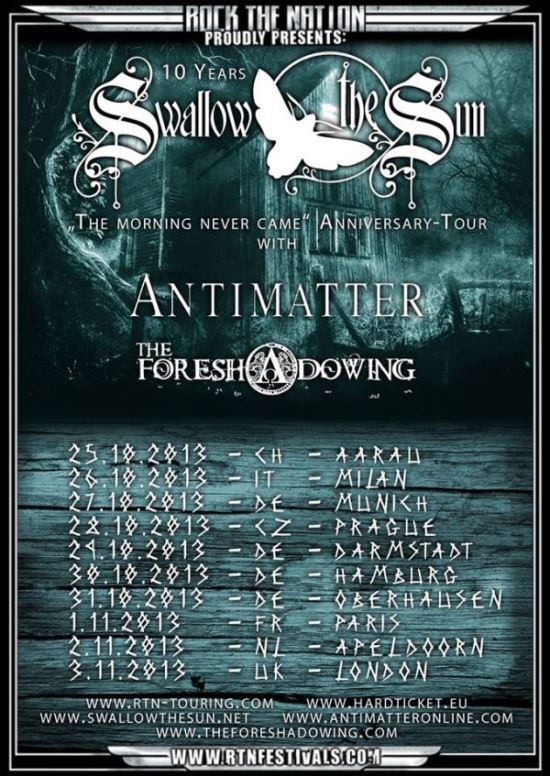