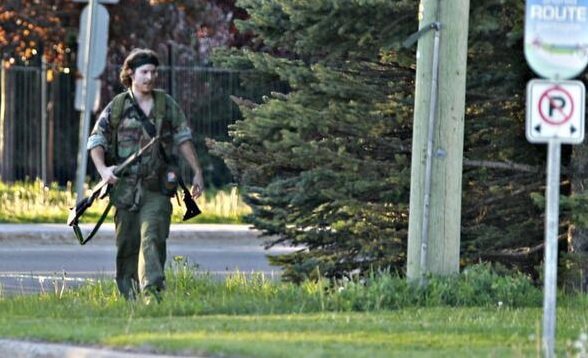 A 24-year-old man suspected of killing three police officers and wounding two others in the Canadian city of Moncton posted the lyrics to the MEGADETH song "Hook In Mouth" just hours before he committed the crimes. On May 5, the alleged shooter posted the lyrics to DETHKLOK's "Castratikon".

Justin Bourque remains on the loose and is said to be "armed and dangerous."

Officers responding to call at approximately 7:30 p.m. Wednesday were fatally shot by the suspect.

Two other officers were transported to Moncton City Hospital with non-life-threatening injuries.

Bourque is described as a young man wearing camoflage with long brown hair. He's believed to be carrying two military-style rifles with high-capacity magazines, a bow and a knife.

According to International Business Times , the lyrics from the song "Hook in Mouth" by MEGADETH allude to a "little man with a big eraser, changing history" with the final lyric of the status stating: "I believe my kingdom will come."

The chorus of the song spells out "Freedom" in acronym. Other cryptic references include a "cockroach in the concrete" and if you "make a person disappear... no one will ever miss you."

Canadian police released the above image of Justin Bourque dressed in army camouflage and armed with two guns.

Back in April, a man suspected of killing five young people at a Calgary, Alberta, Canada house party posted the title of a MEGADETH song, "Dread And The Fugitive Mind", and album title, "The World Needs A Hero", on his Facebook page in the hours before the stabbings.

That was not the first time a MEGADETH song had been linked to an act of violence in Canada. The track "A Tout Le Monde", which originally appeared on the band's 1994 CD "Youthanasia", created controversy in September 2006 because the song was cited in an online post by Dawson College killer Kimveer Gill as one of his favorites before his Montreal shooting spree. He killed one student and wounded nineteen others before committing suicide. 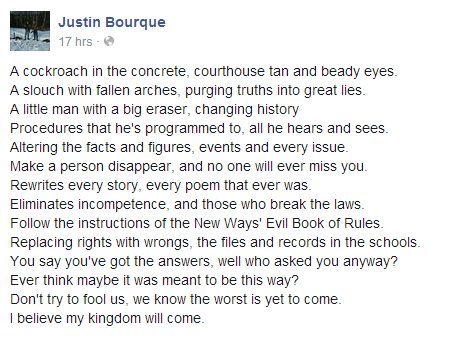