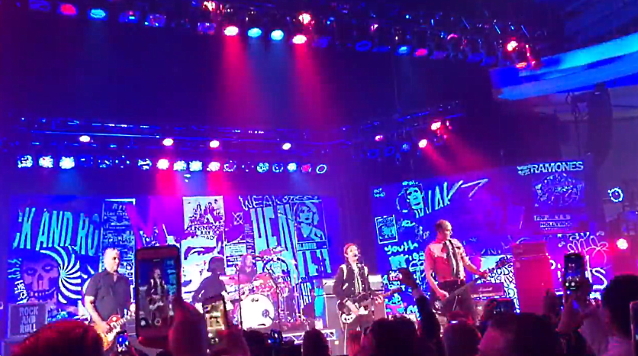 The surviving members of NIRVANA reunited last night (Saturday, January 4) at The Art of Elysium charity's annual "Heaven" gala at the Hollywood Palladium in Los Angeles. Dave Grohl performed with Krist Novoselic and Pat Smear at the fundraiser that connects artists with children and communities in need.

Grohl, Novoselic and Smear played a five-song set of NIRVANA's hits, with Beck, St. Vincent and Dave's 13-year-old daughter Violet handling lead vocals. "Lithium" featured St. Vincent at the front, with Beck singing "In Bloom" and "Been A Son". Violet joined the group to perform "Heart-Shaped Box" before the set closed out with a performance of David Bowie's "The Man Who Sold The World".

The Art Of Elysium, which was founded in 1997 by Jennifer Howell, is a nonprofit organization that supports "individuals in the midst of difficult emotional life challenges like illness, hospitalization, displacement, confinement, and/or crisis," according to the charity's web site. "We serve medically fragile children, teens, adults, seniors, those dealing with social, emotional and mental health issues and the homeless."

Grohl, Novoselic and Smear previously reunited at the end of FOO FIGHTERS' set at Cal Jam festival in October 2018 to perform six songs. They were joined during the NIRVANA mini-set by John McAuley of the band DEER TICK and Joan Jett. They played three songs with John on lead vocals — "Serve The Servants", "Scentless Apprentice" and "In Bloom" — before Joan took over for "Breed", "Smells Like Teen Spirit" and "All Apologies", with the latter featuring Brody Dalle on bass and Krist moving on to the accordion.

Prior to Cal Jam, Jett last fronted NIRVANA at the latter's Rock And Roll Hall Of Fame induction in 2014, while McAulay, along with Jett, took part in the induction aftershow party performance.

In 2017, Grohl looked back on NIRVANA's Rock Hall reunion, saying: "I got together with my old bandmates, Krist and Pat, and guests including Joan Jett and Lorde, and we played those songs again. It sounded just like it did, but, of course, with one thing missing. We hadn't played a NIRVANA set since Kurt [Cobain] died. Could we do that again? I don't know."

WATCH: Dave Grohl, @KristNovoselic, and Pat Smear reunite at @TheArtofElysium gala, joined on stage by @beck and @st_vincent to perform #Nirvana’s cover of “Man Who Sold the World.” pic.twitter.com/t0ntCHUDPo 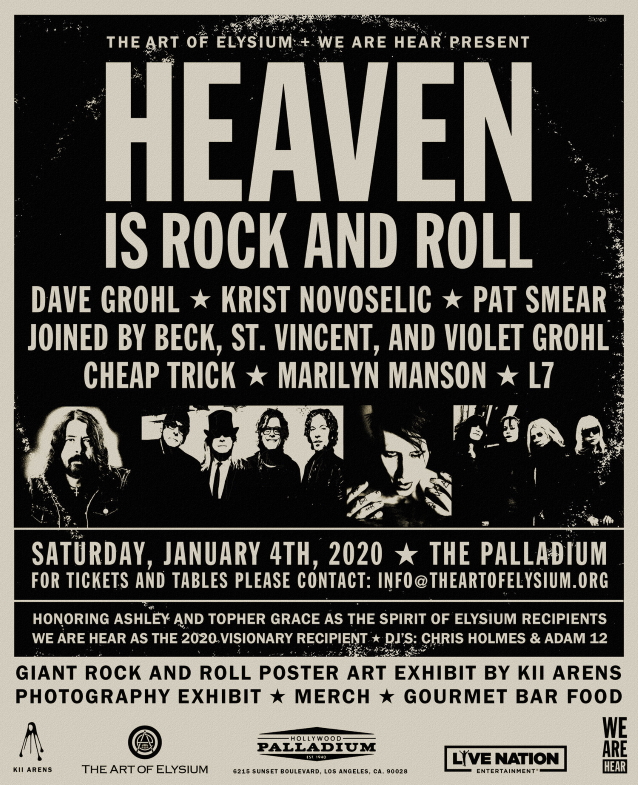