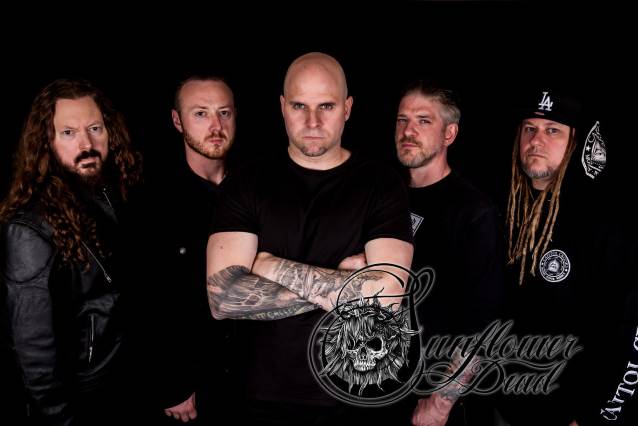 The follow-up to 2015's "It's Time To Get Weird", which included the Active Rock Top 40 hit, and title track, featuring Jonathan Davis of KORN, "Coma" is a stripped down, raw beast of a modern hard rock record, to match the band's recently stripped down image. Starting life and continuing through two records with intricate costumes and heavy, zombie-esque, stage makeup, "Coma" sees the band step out from behind the image, and put the focus on the songs.

Says vocalist Del Pizzo: "Though we are extremely proud of what we have accomplished on our own with the more theatrical version of the band, SUNFLOWER DEAD has grown considerably. The entire process of writing and recording this album was fueled by a sense of aggression unlike anything in our previous output. It was clear to everyone involved that this was the moment to strip off the makeup, sign with a label and let the music speak for itself. So we did. And when it came down to it, EMP was definitely the right place."

He adds: "We have known Thom (Hazaert) forever. He actually helped launch SUNFLOWER DEAD's first album and got us our first national tour back in 2012. Combine that with having David Ellefson on our side, and this was an easy decision."

Adds guitarist Jaboo: "The music on 'Coma' is more focused, vicious and emotionally dialed in than any of our previous work. This record is like the rebirth of the band similar to what Christopher Nolan did with the 'Batman' saga. That rebirth is that much stronger with the addition of Christian Olde Wolbers on bass and Brian 'Brett' Weir on drums."

Says EMP's David Ellefson: "SUNFLOWER DEAD is a great, hardworking band who truly embodies the type of DIY ethos that EMP was built on. They have not only released their own records and had great success at radio, but also managed to tour the World supporting major artists, all without the support of a label. We're proud to welcome them into the EMP mamily!"

SUNFLOWER DEAD spent the last three years on the road supporting "Weird", including dates with SNOT and KORN in the U.K., both legs of IN THIS MOMENT's "Hellpop" tour, as well as runs supporting AVATAR, HELLYEAH and MUSHROOMHEAD.