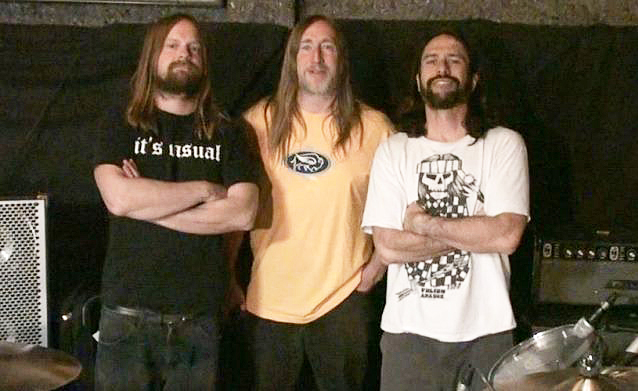 The first in a series of video clips featuring footage from the "Mannequin" studio sessions can be seen below.

Said Balch: "In between FU MANCHU tours, I was writing all this material that was really frantic and dark. Lots of notes and strange chords.

"A lot of times I would go interview a guitar player for my site PlayThisRiff.com and come back inspired and full of ideas. Just to make Scott Reeder laugh I would send him a file to play drums on.

"Well, anybody who has seen FU MANCHU live knows Reeder is a monster behind the kit. So I would try to throw him some curveballs to trip him up. No such luck. Every riff I sent him he nailed. After a while, there was an album's worth of stuff.

"I really wanted Scott Thomas Reeder to play bass on it. I love the work he has done in his recording studio too, so I figured that if we recorded stuff there, hopefully he'd dig it and play on it.

"I remember after the first take we walked into the control room and Reeder said, 'I had an idea!' He asked to play on it and I almost crapped myself. I don't think I've ever said 'Yes!' faster.

"His bass lines are insane. Lots of drop-A stuff which is probably pretty hard on bass. He nailed it too!

"Once the bass tracks were in place, we needed vocals.

"I had lyrics and melodies in my head. A lot of the vocal parts were four-part harmonies. Crazy stuff. So I laid down vocals on the home demos using a vocoder and a guitar.

"I thought if I could get an unmixed album with vocoder vocals together, I could start sending it out to singers that I liked to see if they had any interest. I went back into Scott Thomas Reeder's studio to lay down the vocoder parts as a guide for singers. I did the track 'Gang Justice' first and Reeder turned around and said, 'That's how the vocals will stay. It's inane.' He asked, 'Do you have stuff for every song using the vocoder?' I did. So we went to work. The only song I didn't have vocals for Reeder sang. It's named 'I'm Not Upside Down'.

"Overall, this record is heavy and dark. It's inspired by DEVO, VOIVOD, KRAFTWORK, TORCHE, SLAYER and much as it's inspired by ASWAD, JOE PASS and WES MONTGOMERY. The riffs are heavy and the vocoder vocals are full of harmonies.

"I wanted a super-heavy groove that would support angelic vocal harmonies. I think we achieved that.

Added Scott Thomas Reeder: "Yeah, Bob from FU MANCHU came into The Sanctuary do some recording with the other Scott Reeder — the drummer from FU MANCHU. I was stoked — been wanting to meet that guy for years! So they knocked out some crazy tracks all in a day — jaw- droppingly great stuff. I didn't know if it was supposed to just be drums and guitar... so I asked later on, 'Who's playing bass on this stuff?' They hadn't decided yet, but Bob was gonna come back and put some bass tracks down later. I suggested that maybe I take a stab at it, and they were down! It's really crazy stuff, the most challenging material I've done since I was in THE OBSESSED. I got through most of it — there were a few 'guide tracks' in there that I asked Bob to put down that were flawless — I ended up leaving those in. Spent just a few more days with Bob coming back to the ranch to add some textures with his arsenal of effects.

"I was kinda bummed when we wrapped on tracking! It was a blast working with these guys, and I'm glad the the other Reeder is a great guy and a monster drummer — can't wait for the confusion that is sure to come from having both of us on this thing."

Said Scott Reeder: About two years ago, Bob and I started trading riffs and beats back and forth via the wonders of modern technology. Sometimes he would be sending me three different things in one file and I would just throw up a 57 as an overhead and record my whole kit and send it back. Or I might have a beat and say, 'Hey, play something to this.' 'Whites Of Your Eyes' started that way. It was much faster and I was just warming up around the kit and got inspired to get it down. Then we got together and just slowed down the tempo and he added new parts.

"We agreed that most of the stuff needed not to be super picked apart and scrutinized. It was more of a 'first-thought-best-thought' approach. And whatever made us just laugh and go, 'Yeah, that's super weird. It's gotta be that way!!'

"It all springs from Bob's riffs; he can play anything, but he plays it the way you want to hear it!! As always, that's the most fun stuff to play to. I think that shows up in recording. It's fun to listen to.

"We blasted through 10 songs of basics in four hours. We were just having a great time, so we just knocked it out!! And to have that great bass playing of Scott's in there, I could not imagine it sounding heavier but, of course, he just blew me away."

Continued Balch: "In the end, we had J. Robbins (CLUTCH, THE SWORD, THE HIDDEN HAND) mix the record. I loved his work and I'm a big fan of the band he played bass in GOVERNMENT ISSUE. He mixed THE HIDDEN HAND's 'Mother, Teacher, Destroyer', which is one of my favorite-sounding records. I wanted to get a heavy sound like that, but I also wanted a DEVO 'Duty Now For The Future' or RUSH 'Moving Pictures' vibe. I think that those ingredients play off the vocoder really well.

"I've never even met J. Robbins. It's funny, I don't even know what he looks like. We spoke on the phone about the approach I wanted and then I sent the tunes to the East Coast to have him work on it. He did an insane job and was a total pleasure to work with.

"We picked Dan Coutant at Sun Room Audio to master the record. He has worked with CLUTCH and COLISEUM in the past. We saw eye to eye immediately."