Canadian rockers SUM 41 will embark on a North American headlining tour this fall. Joining them on the trek will be THE AMITY AFFLICTION and THE PLOT IN YOU.

The tour will kick off on September 29 at the Louder Than Life festival in Louisville, Kentucky and end on November 2 in Edmonton, Alberta, Canada.

SUM 41 is touring in support of its latest album, "Order In Decline", which came out on July 19 via Hopeless Records. Looking back at the band's storied 23-year career, this album is undoubtedly SUM 41's heaviest and most aggressive album to date, while also being their most dynamic and raw.

Armed with the most honest and intimate songs of his career, frontman Deryck Whibley poured everything he had into the upcoming album. Producing, engineering, and mixing the album in his home studio, he pain-stakingly crafted and fine-tuned each song, highlighted by fast and full riffs, guitar solos from lead guitarist/backing vocalist Dave Brownsound, harmonious chords from guitarist Tom Thacker and the heavy, heart-thumping rhythm section of bassist/backing vocalist Cone McCaslin and drummer Frank Zummo.

After over 15 million records sold worldwide, a Grammy Award nomination, two Juno Awards (seven nominations), a Kerrang! Award in 2002, as well as multiple Alternative Press Music Awards, SUM 41 is quite simply a rock band — uncompromising and honest with no intention of slowing down. 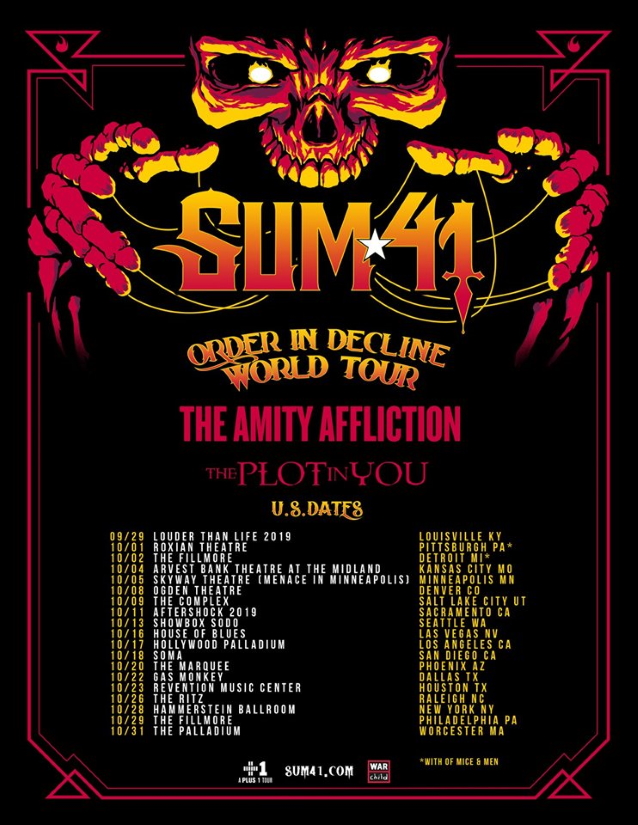