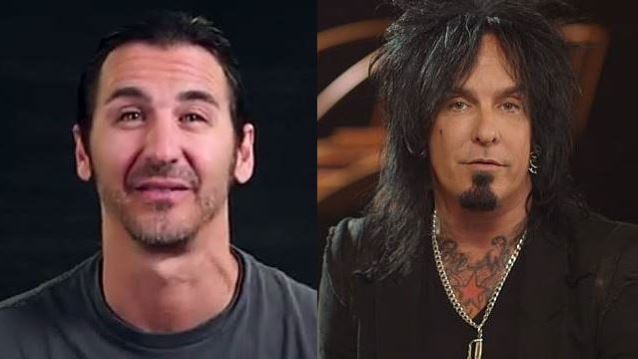 GODSMACK frontman Sully Erna says that he refuses to speak publicly about his long-running feud with Nikki Sixx because he doesn't want to give the MÖTLEY CRÜE bassist "the kind of cheap publicity that he's looking for."

In May of this year, Sixx said that MÖTLEY CRÜE was ready to turn down an opportunity to headline more than a dozen U.S. festivals if it meant that he and his bandmates would have to share the stage with GODSMACK.

Sixx's latest comments were fueled by his ongoing war of words with Erna, who reportedly wrote GODSMACK's song "Cryin' Like A Bitch" about Sixx after the two musicians clashed during the 2009 Crüe Fest 2 tour, on which GODSMACK was a support act and CRÜE was the headliner.

Speaking on his "Sixx Sense With Nikki Sixx" syndicated radio program, Nikki said: "Yesterday somebody came into the studio and they said, 'Hey, GODSMACK would really like to be on this show.' And I said, 'Over my dead [expletive] body.' And they said, 'Well, you know, they wanna be on the show because their record's coming out.' And I go, 'Did you forget the fact that they wrote a song about me called 'Cryin' Like A Bitch' and that there's probably 15 festivals that MÖTLEY CRÜE is headlining and that we said if GODSMACK's on 'em, we're not doing them? And that was just the beginning of my revenge. And that I take every opportunity to slander them and be very immature? And then they wanna be on the show? Dude, have some credibility. I mean, Jesus Christ! I'm so embarrassed for you. At least you can go, 'We've got a new record and we don't wanna be on that [expletive]'s radio show.'' [And he said], 'Well, we actually need some help now.'"

During an interview earlier this week with Christopher Derek Foley (a.k.a. KiddChris) of the WEBN radio station in Cincinnati, Ohio, Erna was asked how he felt about that fact that Sixx will now probably have to play GODSMACK's music on his radio show because Sully's band was back at the top of the music charts.

"The one thing that I'll never give that guy is the kind of cheap publicity that he's looking for," Erna replied (hear audio below). "I don't do media wars. If he has something to say, he can come and say it to my face… If he has a problem, he can come see me."

He continued: "This isn't gonna be anything for publicity. I'm not gonna give him that. He's on the downslide of his career, and I'm just not gonna do it."

He capped his response off by saying: "We've already talked about this too much."

When asked directly if the "Cryin' Like A Bitch" track was written about Sixx, Erna told Albany, New York's Q103 radio station, "It's very difficult for me to restrain myself from answering that question because as honest as I'd like to be, the other side of me doesn't want to give anybody the extra exposure, even if it's negative. So, I'm just gonna plead the fifth."

Back in May 2011, Sixx had the following to say regarding Erna's complaints about how GODSMACK was treated on the Crüe Fest 2 tour, "Every person — from road crew, fans and even all the bands on the tour (including [Sully's] band) — was so happy, but [Erna] just seems to be crying like a bitch," Sixx replied. "Funny, even his manager told me he's an asshole... Maybe the problem is just in HIS head... I got no problem with him."

Erna admitted in a webisode for the band's fifth studio album, "The Oracle", that "Cryin' Like A Bitch" was inspired by events of Crüe Fest 2. Sully told Artisan News Service at the time, "There's definitely been some rock-star garbage on this tour that we just have never seen in our career . . . this was the first time that I felt like, 'You know what?! If there's gonna be some people that are gonna treat other people a certain way, then I'm gonna go out there every night and . . . make sure that we make you look old and fat, and go home with a nice big fat paycheck."

Samples of some of the lyrics on "Cryin' Like A Bitch" include lines like: "Strut on by like a king/Telling everybody they know nothing/Long lived what you thought you were/Time ain't on your side anymore"

GODSMACK drummer Shannon Larkin shed some light on the inspiration for "Cryin' Like A Bitch" during a 2011 chat with "Interviews From The Edge". He said: "Several things actually happened [during Crüe Fest 2], honestly. You know, the rest of the band... we get along great with [other MÖTLEY CRÜE members] Mick Mars, Tommy Lee. I got along great with Nikki Sixx. In fact, he had called me over to catering one time and said would I like to play with his SIXX: A.M. [side project], on the record. And I was like, 'Yeah!' But then this was, like, three weeks into the tour, and then four weeks later, him and Sully had this clash. And it stemmed from [MÖTLEY CRÜE's] security, I think, more than Nikki, but you know, Nikki is the leader of the band. Basically, [it had to do with their] security throwing us off the stage... whatever... It was a bunch of ego shit that none of us really got into. But MÖTLEY CRÜE kind of acted like... Well, their security, in any event... they were real weird with our guests getting backstage, like our guests might want to look at MÖTLEY CRÜE. Our guests were there to see us and they didn't care a shit about MÖTLEY CRÜE. And MÖTLEY CRÜE is a legendary band that we all respect."

He continued: "When I was 17, I had 'Shout At The Devil' and all that, hell yeah! But it just kind of fronted us a little that they would think that our guests would be star-struck over them. And half the time these were people I've known for 30 years — [and they] can't even get backstage because MÖTLEY CRÜE doesn't want people back or whatever.

"So that's where the bad blood came from. And then Sully runs his mouth, Nikki runs his mouth… They're both big rock stars. Next thing you know, it's a battle in the press."