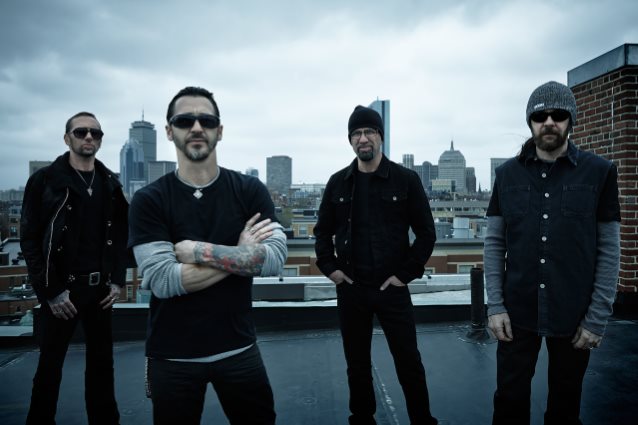 GODSMACK frontman Sully Erna was interviewed on the July 16 edition of "Whiplash", the KLOS radio show hosted by Full Metal Jackie. You can now listen to the chat using the widget below.

Speaking about how his songwriting process has evolved over the years, Erna said: "Interestingly enough, if anyone knows anything about GODSMACK, we've always been kind of a tough-edged band — really good music for extreme sports and being in the gym and anything like that: football, motorcross, whatever. We even have a lot of Army and Navy and marines that come to our shows and just tell us stories about how it got them through really tough times when they had to fly over Iraq and Afghanistan and whatever, and do their job… jobs that they didn't really wanna do. They turned up the music and just did what they had to do, and it helped them get through something that would have been naturally pretty difficult to do. But now we're getting to a place where the band has been around for twenty years. We're very blessed and lucky to still have a career and have fans out there that care about us. And we wanna be smart as well. And, by the way, I'm not that young, angry kid that I used to be once. I'm a lot older now, I have a daughter of my own, I'm in a good place in my life. I don't have a whole lot to really be stressed out about or mad. And so the music has to evolve with that. Everything that I've ever done in music was always based on something that affected me on an emotional level — it was never made-up stories; it was always based on my life to some degree. And so now where things are a little bit brighter and a little bit better, we're not gonna write about flowers and ice cream, but I certainly think that it's gonna have a little bit more positive of a message and I definitely think it's even gonna have a little bit more of a commercial edge to it. Because we're older now, and we wanna kind of continue to write and play music that we also enjoy and not always have to be in 'screamo' mode and chugging away."

He continued: "Me and my drummer recently just said… We made an agreement, we were, like, 'I think we've come up with every combination of chugging that we can.' We call it the Morse-code effect. I'm, like, 'Dude, I honestly can't think of any more combinations. I'm done with chugging. I think now we're just gonna focus on writing really well-written songs.' And that's what I've been kind of focused on for the last so many years. And due to that, I listen to a lot of great songwriters — Elton John, Michael Jackson… whoever it is that has been legendary and iconic. And I try once again to absorb and learn from them so we can put out the best record we can due to the year and the day and age that we're in."

Asked what the hardest part of writing music is for him, Erna said: "I think it's the challenge. It's just the challenge of getting up every day and putting in your time. That's complicated. When the ideas come and everything's flowing, it's almost effortless. And if anybody's out there who's creative, who's an artist, I would highly recommend that you YouTube Elizabeth Gilbert's TED talk on 'Your Elusive Creative Genius'. She's the lady who wrote the book 'Eat, Pray, Love'. She does a TED talk, and she does this amazing speech on how to take the pressure off yourself, because, as artists, it's no wonder that we become manic-depressive, alcohol addicts. We're always trying to beat our last thing, we're always wondering if our best days are behind us and if we've already done our best work and how do we top our last record or how do I put on a better performance as an actor or as a book writer. So we put a lot of pressure on ourselves. And I really think people who are interested in this kind of thing should really watch this talk. It's very, very inspiring; it changed the way I work. But for me, that's what it is — that's the hardest part: just going there and doing your job and hoping that your genius shows up and that brilliant things happen."

Sully also confirmed that GODSMACK is hoping to release a new single in the first few weeks of 2018 before following it up with a full-length album by early spring.

Erna recently walked back his previous comments that GODSMACK intends to commemorate the band's twentieth anniversary in 2018 with a massive world tour that could feature the group playing its self-titled 1998 debut disc live from start to finish.