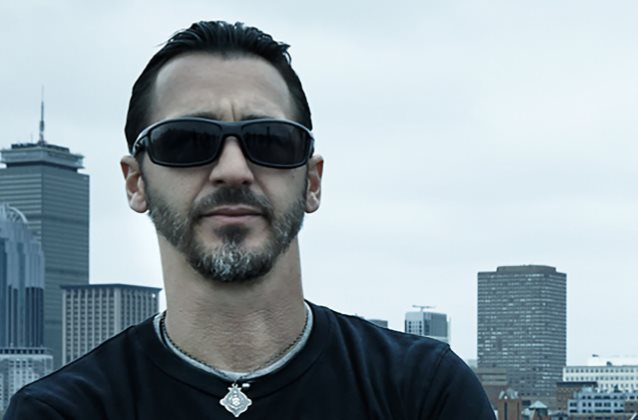 Sully Erna says that GODSMACK is "not making any promises" regarding its previously announced plans to commemorate the band's 20th anniversary in 2018 with a massive world tour that could feature the group playing its self-titled 1998 debut disc live from start to finish.

Back in March, Erna told Houston radio station 94.5 FM about GODSMACK's upcoming tour: "We're gonna do a massive production. We're gonna kind of base it around the theme of the first record. We're even talking about coming out and doing the first record front to back to open the show — set up the staging a little bit more old school and stuff like that, and then kind of morph it into the back half of the set, which would be all the hits and the solo and some of the new stuff."

But now, in a brand new interview with the 93X radio station conducted at this past weekend's Northern Invasion festival in Somerset, Wisconsin, Erna said that no concrete plans have yet been made regarding GODSMACK playing its first LP in its entirety. "We don't know that yet," he said (see video below). "That's been circulating, 'cause I opened my mouth a little bit soon, but as we get deeper into writing this new record, that may change. So we're not making any promises on that yet."

Erna told The Pulse Of Radio a while back that he was ambivalent for some time about playing albums from front to back in concert. "It seems like a lot of bands would come out and do that when they're celebrating like their twenty-fifth anniversary on the record and stuff [laughs] — I'm old, but we're not that old yet. We're getting there though. It's not gonna be but another minute before we go like, 'Wow, really, twenty years? Okay… '"

Erna also said in the 94.5 FM interview that GODSMACK originally planned to put out a new album in 2017, but explained why that changed, saying, "We wanted to do something this year, but we were just, like, 'You know, let's just wait another second,' because if we release this at the top of 2018, it will be our 20th-year anniversary of the first record, and we wanna do something special."