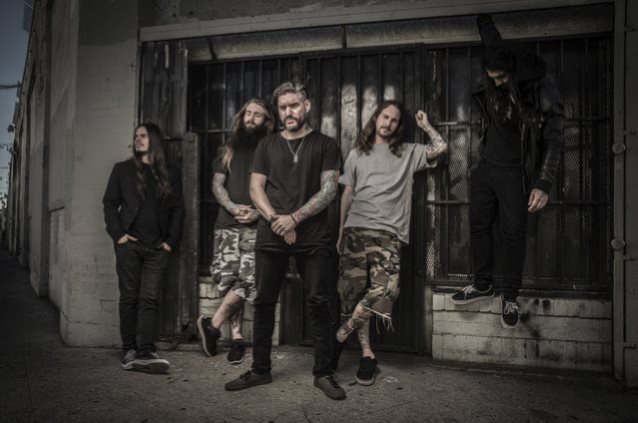 California deathcore masters SUICIDE SILENCE will celebrate the tenth anniversary of the release of their debut album, "The Cleansing", by performing the LP in its entirety on a U.S. tour later in the year.

The news of the special trek was revealed by SUICIDE SILENCE drummer Alex Lopez during an interview he gave to ArmyOfOneTV at the Chicago Open Air festival on July 14. His comments came as he was laying out the timetable for rest of 2017, telling the site (see video below): "Right now, our plans for the future are to write. We're definitely eager to get in the studio. We've got some festivals coming up. We're playing the Warped Tour, and we're playing Knotfest Mexico, we're going to Ecuador… We're just doing a bunch of small shows, and then we're gonna do a tour later this year. It's gonna be a ten-year 'Cleansing' tour, so it's a ten-year run for our album 'The Cleansing'. I think we're gonna bring out some pretty cool bands, play the album for you and play some other stuff. So it should be really, really cool. I'm looking forward to it. And for those of you out there that want to see the first record be played live, come out and support. We're gonna have a bunch of cool surprises for everyone."

SUICIDE SILENCE is continuing to tour in support of its controversial self-titled album, which saw the band take a noticeable change in direction from their traditional deathcore sound.

The uproar over the LP's approach — featuring a more melodic and clean singing style, in the vein of acts like DEFTONES and KORN — even caused one disgruntled fan to launch a petition to stop the record coming out.

Lopez defended SUICIDE SILENCE's decision to break away from their previous approach, telling ArmyOfOneTV: "I believe in artistic growth, which is kind of like THE BEATLES. They started off as a pop band, I guess, a dancey band, and then it turned into more of a psychedelic band and then it turned into a blues band. I'm an appreciator of evolution of a band.

"I don't listen to the music, I listen to the people who are playing, so I like to transcend the same thing with our music," he continued. "We do it for ourselves, and for our fans as well, but before everything, it's an expression, so I don't wanna be playing the same thing the rest of my life. So writing songs and albums that are a little different and dynamic against each other is pretty much the goal, and we'll keep doing it.

"We're heavy and we're soft. Heavy is not a tone, heavy is a feeling, so it's gotta captivate you and take you where you don't wanna go and make you feel things you don't wanna feel."

Lopez admitted that "it's been a little different for people to adjust to" SUICIDE SILENCE's new sound, but he said that it's "what people need. A lot of people don't wanna adjust to things and they don't want change, but, like I said before, I don't wanna be playing the same thing over and over again," he explained. "You've gotta take risks as an artist in order to get new results, so we definitely took a risk on it, but I don't think that it was too much of a change."

"The Cleansing" was issued in September 2007 through Century Media Records. Upon its release, it debuted at No. 94 on The Billboard 200 chart, selling 7,250 copies in its first week and becoming one of the best-selling debut albums in the label's history.

Released this past February, "Suicide Silence" is the band's second album to feature vocalist Hernan "Eddie" Hermida, who replaced Mitch Lucker in 2013.

Lucker died November 1, 2012 after sustaining injuries in a motorcycle crash in Huntington Beach that Halloween night.