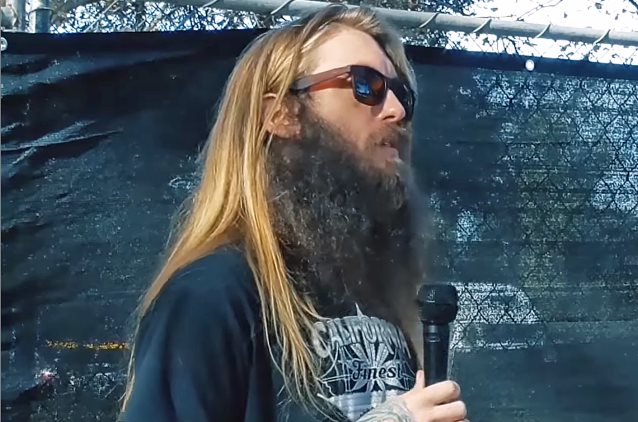 Rock Hard Live conducted an interview with guitarist Mark Heylmun of California deathcore masters SUICIDE SILENCE at this past weekend's Aftershock festival in Sacramento, California. You can now watch the chat below.

Speaking about SUICIDE SILENCE's forthcoming follow-up to 2014's "You Can't Stop Me" album, Heylmun said: "Somewhere mid-2015, we decided we wanted to start writing. We started jamming and recording some shit and it came out really fucking badass. Fast forward to one whole year later, after touring the world and then taking six months off to write the record… The main thing is we got home after touring with KORN in the U.S. last October, we got home and we just jammed and wrote a whole hell of a lot of new music and then went into the studio with [producer] Ross Robinson in February or March, finished the record, had Joe Barresi mix it, and it's gonna be out — self-titled — it'll be out next year, February or March. It's something we're real proud of."

In a recent interview with Wall Of Sound, Heylmun elaborated on his previous comment that SUICIDE SILENCE's upcoming album would not be what people expect.

"Well, pretty much what I meant by 'people won't expect what it is' was that people won't expect the 'punk rock' attitude that we gave toward this record," he said. "It's the raw, live, everything is us. It's not gonna be full of computer trickery. It's not gonna sound like all the Pro Tools ninjas and Logic ninjas. We got real microphones on real drums and real amps with real performances, real takes, real fucking everything. The record's gonna be natural and raw and fucking pissed. It's gonna be exactly what music needs, which is some fucking heart. Some fucking blood. Some real fucking 'give-a-shit' passion put down onto moments in time. I mean, we recorded with tape on this record. There's real music, it's not samples and a bunch of fucking bullshit like Auto-Tune or whatever the fuck. We just went for it, for a record that speaks for us and really exemplifies where we're at as a band. It's gonna be something else for people to witness. Like a car accident they can't keep their eyes off of."

Heylmun added that SUICIDE SILENCE intentionally took its time making the new album to insure that the record will turn out exactly how the band wanted it to be, without any external influences affecting the process.

"We don't want to compete with music industry bullshit, where everybody's just trying to crank out a record every two years because that's what you have to do," he said. "Or, like, put out this record because this is what people are gonna want. This is the first record that we've fully just put blinders on and we're not looking at anything going on outside of us, just what's in front of us. And what's in front of us is our band. And the music we're gonna make is the music we're gonna make and there's no outside influence other than SUICIDE SILENCE doing what SUICIDE SILENCE wants to do. So it feels good."

Heylmun also talked about the songwriting process for the follow-up to 2014's "You Can't Stop Me". He said: "I think that overall idea for this record, and the process, is to try everything. If there is an idea, try it. Don't be afraid, you know? Don't let the fear of trying something different stop you from opening up a can that might be the… exact soup you wanna taste, I don't know. [Laughs] There's lots of food metaphors when it comes to music: we're making a sandwich and one person has to show up with the vegetables and another person has to show up with the meat, but some people don't eat meat, so you gotta show up with the right cheese. And some people don't like cheese… [Laughs] I don't know. We always want to work together to encourage everyone to be the best that they can be. So that's especially where we're at, having gone through a lot, and having a new member come in and having to rebuild that whole camaraderie of being creative. We're all just trying to give to the music, and give to each other and give, give, give, give, give. Because we gotta get shit out and give this fucking music, this fiery piece of nothing, this magical thing that doesn't even exist until we create it. Just throw down and give it all you can and encourage each other to give all you can and encourage each other to give it everything you possibly can. So that's what the new record is going to be like."