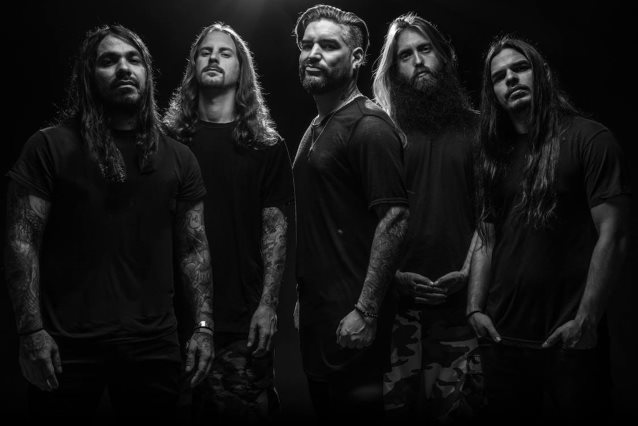 Brendan Crabb of Australia's Loud recently conducted an interview with vocalist Hernan "Eddie" Hermida of California deathcore masters SUICIDE SILENCE. A couple of excerpts from the chat follow below.

Loud: Do you feel [the] new [SUICIDE SILENCE] songs [from the self-titled album] can gel with the earlier material within a live environment?

Hermida: "Oh, yeah. I mean, it's still SUICIDE SILENCE, so they definitely meld well together. That's the one thing that people don't understand when they go online and start talking about these songs, and the one reason I'm able to brush off a lot of the distasteful comments, is because they're not actually paying attention. And they're not listening with an open mind. They're just going, 'Oh, this has singing in it, and I hate singing and any kind of weird singing is bad singing, so I hate it.' And those kids are going to have an awakening. They're going to be… They're gonna see that this record is still heavy, it's still crushing, especially when they come out a show live, if they decide to. The songs actually sound a lot heavier live than they do on record, and that's just how SUICIDE SILENCE always has been. There's a certain intensity that we bring whenever we start jamming that is unmatched on anything else we do. It's the live aspect; SUICIDE SILENCE has always been a live band."

Loud: The new album is still heavy as you said, but it's a different type of heaviness — raw, wounded — rather than the more conventional, mosh-friendly brutality you've been renowned for.

Hermida: Yeah, definitely. That's all attributed to [producer] Ross Robinson and the way he records. It's also attributed to the fact when we recorded, a lot of the stuff was made live. It was the closest thing to pretty much a band being in one place and recording a whole record at the same time that you can get. Obviously, we overdubbed vocals. I was doing clean passes of the songs, as were the guitars and bass. You pretty much say, 'You ready to go?' Press record and play, and you play all the way through the song. That was how we recorded the whole record. There was no punching in, there was no editing. There was compilations; you take a couple of different takes and you compile them into one, but other than that, man, this record is about as raw and as live as it gets for a band, which is not typical, and most kids, most people aren't used to hearing that these days. They're used to hearing the over-produced, over-edited, kind of stale, sterile sound that a studio brings these days."

Loud: One review I read of the new record posed the question of whether SUICIDE SILENCE would backpedal and return to the style of previous albums if the new record isn't well received. You seem to have the courage of your convictions, though.

Hermida: "I don't see us backpedaling. I also don't see this record failing. I see that a lot of people are probably going to come around to liking this record once they hear it. We purposely put out two songs that were going to create a buzz. We could have released a couple of the heavier tracks off the record, and been a little bit safer. But we're not here to be safe, man, we're here to test boundaries, and we're here to show people who they really are. When you're a kid who is on the Internet spewing nothing but hatred and creating that world of hatred around you, we want to prove that there is no hatred, that, really, the only thing that exists is love. And when somebody feels passionate about something — be it they don't like it or they do like it — it's really kind of a reflective statement whatever they make. If you like something, it's usually saying something about yourself, that you're open, that your mind is willing to accept anything. If you're closed-minded, there's probably something going on deeper inside of you that doesn't agree with you, and makes you instantaneously not like things. I have a friend who doesn't like anything. It's like, 'Hey. man, let's go have some froyo.' And he'll be like, 'Froyo? Fuck that shit. That's some new age fucking bullshit.' But then you go, 'Oh, it's just ice cream with fucking candy toppings,' and he goes, 'Oh… well, fuck that shit anyway.' And then you bring it back and you start eating it, and you can see how much he really wants to try it, but he's sticking to his guns because something inside of him is telling him 'no.' You know what I mean? There's two types of people on the face of this planet. There's people who say 'yes,' and there's people who say 'no.' And the people who say 'no,' they'll come around. They eventually say 'yes,' because I know I did. When I was younger and I would hate on things, and then realized that I was just being a hater. [Laughs] I realized that some of those records that I hated on the most were my favorite records growing up."

Read the entire interview at Loud.