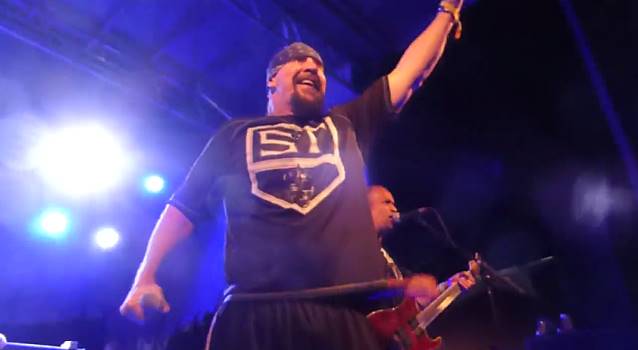 Fan-filmed video footage of SUICIDAL TENDENCIES' June 20 performance at Amnesia Rockfest in Montebello, Quebec, Canada can be seen below.

SUICIDAL TENDENCIES' latest album, "13", sold around 3,200 copies in the United States in its first week of release to debut at position No. 187 on The Billboard 200 chart. The first studio album in 13 years from SUICIDAL TENDENCIES was produced by vocalist Mike Muir and Grammy-nominated engineer/mixer Paul Northfield (DREAM THEATER, HOLE, RUSH).

In a May 2013 interview with Loudwire, Muir stated about the making of "13": "We were close to [having] 160 songs, but there were a lot of changes in the studio right up until the very end. I think if it hadn't been so long we probably would still be recording right now, but we actually kind of enjoyed that process. Putting records out isn't very fun, but recording is fun."

He continued: "I think one of the things is the way music is now and doing your own thing. It used to be you put out a record and you went on tour for a year or so, you got back, took a little time off and then you went in the studio and recorded 15 or 20 songs and you picked them and put it out. I don't think that is necessarily the way things are anymore and the fact that things don't sell or anything like that. Then it gets to the point, like, 'Why are we putting out something and kind of defend it in a sense because all of our records always get attacked when it's something we love?'

"Ten years ago, we got our own studio and we have that ability where it's not, like, 'Okay, we got three or four weeks, we have to get everything done and then that's it.' You're able to go into the studio anytime and write and when you do that you're not sitting there going, 'How's this song going to fit in on a SUICIDAL record?' You just record and you do what you like and you have a lot of fun. I think it was at the end when it started getting to so many years where we were, like, 'We need to kind of get this done.'"