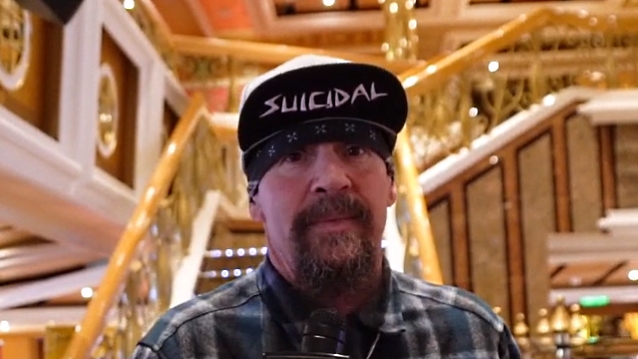 During an interview with Rockwell Anderson of The Edge aboard this year's ShipRocked cruise, SUICIDAL TENDENCIES frontman Mike Muir spoke about the latest two high-profile additions to the band's lineup: THE DILLINGER ESCAPE PLAN guitarist Ben Weinman and ex-SLAYER drummer Dave Lombardo .

"Ben Weinman [is a] legendary dude," Mike said (see video below). "My definition of legendary goes kind of what my dad said. To some people, they use words in their ways and you have to have your own. But legendary sometimes is people that are… my dad said it's like the statue at the park with the pigeon shit on. You don't wanna be like that. Legendary is where everything you do while you're alive, every moment you have, you make it matter. And so, Ben is like legendary — every moment matters. And that goes right to Dave Lombardo. It's not about living in the past; it's how you go forward in the future and stuff. And Dave's an amazing person. He's one of those ones that you go places and you just see people [in awe], do that whole thing, that just worship him and his drumming. And he knows every night there's gonna be a lot of people looking at him and wondering if he can still do it. He's one of those people, he doesn't cheat in any way, shape or form. He wants every show to be the best show that he did. He prepares himself before the show. It's not just, 'Okay,' and grabs his drum sticks. The way he lives his life, he wants to be playing, as he says, till he's 85. So it's great to see people that are just so excited to be there."

Guitarist Jeff Pogan announced his departure from SUICIDAL TENDENCIES last July. During his two-year tenure with the band, he played on SUICIDAL TENDENCIES' most recent full-length collection of new material, 2016's "World Gone Mad", and the "Get Your Fight On!" EP, which came out in March 2018.

"World Gone Mad" marked SUICIDAL TENDENCIES' first release with Lombardo, who was able to inject his own feeling into the material.

"They wanted me to be myself and their music is very drum friendly with some amazing structuring and vocals and lyrics," Lombardo told NorthJersey.com about the effort. "They gave me the freedom to do what I wanted and I gave the songs what I felt they needed."

Dave added that playing SUICIDAL's classic songs live "brings back some really good memories. I remember driving the van on one of our early SLAYER tours and me and [late SLAYER guitarist] Jeff Hanneman would listen to their first record and switch off singing the lyrics."

SUICIDAL TENDENCIES' latest album, "STill Cyco Punk After All These Years", was released in September. The LP is a re-recording and re-imagining of a Cyco Miko (Mike Muir) solo album recorded in 1995, "Lost My Brain! (Once Again)".