Travis Barker's MUSINK, presented by KROQ, returns to the OC Fair & Event Center in Costa Mesa, California Friday, March 8, Saturday March 9 and Sunday, March 10 for its 12th year as the premier festival bringing together the best of music, tattoos, and cars.

Travis Barker's MUSINK also features daily tattoo contests, a vendor village, and the Miss MUSINK competition (presented by Sullen) at one of the world's largest gatherings of elite tattoo artists.

MUSINK co-producer Travis Barker says: "Every year we have more and more fun and this year I'm excited to announce SUICIDAL TENDENCIES, LIMP BIZKIT, FEAR, HATEBREED, DEAD KENNEDYS, and more. Super stoked for all the fans to come out for a great time of music, cars, and tattoos.”"

The current music lineup for MUSINK is as follows:

The Low 'N' Slow Car Show presented by Famous Stars And Straps returns to MUSINK, and will feature the best selection of custom rides, American classics and lowriders in Southern California on display, all handpicked by Travis Barker.

A limited number of special $79.00 weekend general admission tickets are available for purchase until December 31 at 11:59 p.m. PT, while supplies last. These $79.00 (plus fees) tickets are priced even lower than last year's tickets as a special thank you to all the diehard MUSINK fans that have been part of the festival for the past 11 years.

All tickets will be available for the following prices (plus fees) beginning Friday, December 14 at 10:00 a.m. PT at www.MusinkFest.com:

All ages are welcome at MUSINK, and kids seven years old and under get in free. 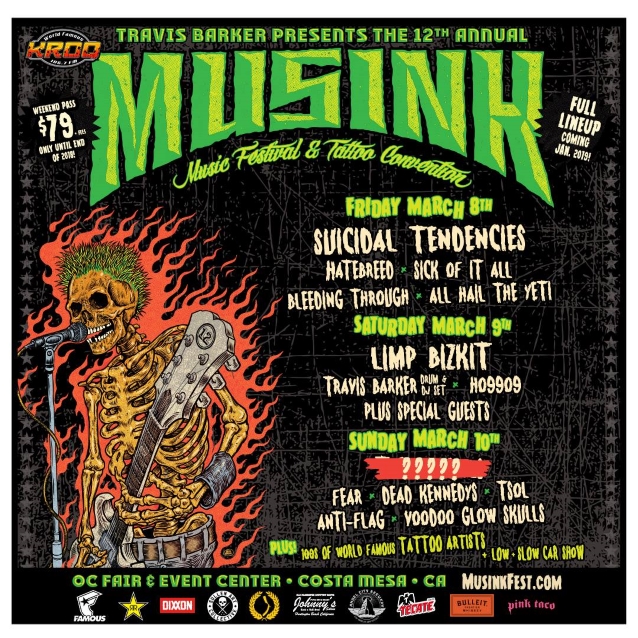