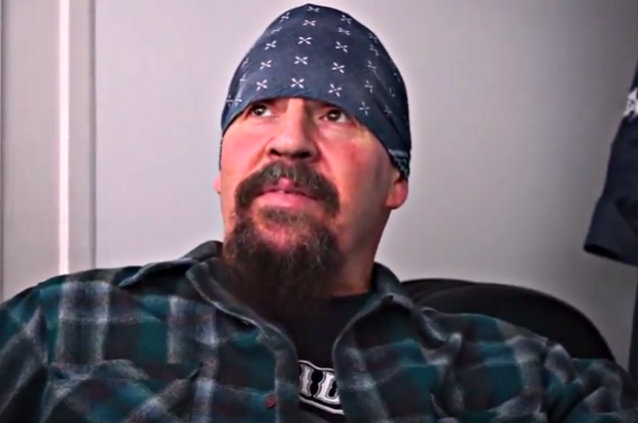 Jerry Loud Mouth of Finland's Rauta conducted an interview with frontman Mike Muir of crossover legends SUICIDAL TENDENCIES prior to the band's June 30 performance at the 20th-anniversary edition of the Tuska festival in Helsinki, Finland. You can watch the full interview below. A few excerpts follow (transcribed by BLABBERMOUTH.NET).

On the band's recent studio and live activity:

Mike: "Actually, the last few years, we've been very busy, a little too busy. So, before the record came out, we pretty much were for about a year, well, since we put out '13' in 2013, we've been going pretty straight and stuff. As I say, you know you've been gone too much when you get up to go to the store and your youngest son grabs your leg and goes 'Where are you going, dad?' 'I'm going to get milk. I'm not getting on an airplane. No.' [Laughs] It's been pretty busy."

On whether his family life is a "hindrance" on SUICIDAL TENDENCIES' touring schedule:

Mike: "I wouldn't say 'hindrance.' If it weren't for my family, I wouldn't be here. It works both ways and stuff. I've said for years, when they say 'That's it.' That's it. But, we just played, did three weeks in France in April and my oldest son is 13, it was the first time he flew out during his spring break and he got to go to a bunch of shows. We did a couple of festivals before there, they came to Japan. They know what I do. They know why I do it. They know the people that I'm around and all of that. That's a big difference, I think. They see the difference between maybe the way we do things and some other bands do, too. Their support is obviously very important. And that's a big part of what we're doing. For us, family has always been something that's very important. Where we grew up, family, is very important and my dad said, 'In life, most people get three families: The one you're born into. That's it. You have no choice.' You have to make yours work, if you don't like something, you learn. You get to be 12, 13, you start hanging out, pick friends, but it's usually just because they live in the same area. You realize later that maybe some of the people you hang out with are not good people and are just geographic. Then when you get to other places, you realize the differences. With our crew, everybody is from different countries. The first thing is you realize different languages, different countries, but when you get to know them, it's good people. The third family [where] you pick a family, you learn what you don't like, don't try to repeat and do the things you like. We've been fortunate that touring around the world, everywhere we go, there a lot of people who are very into SUICIDAL, regardless of what their original culture, language, they have a good understanding of what we're doing and trying to do. That makes things much easier."

On what has "fueled" him throughout his career in SUICIDAL:

Mike: "To me, now, I can put it in a couple of ways because I have kids. I think the future could be very good and you turn on the news and sometimes I don't want to see the news when we're gone because of all the shit that is happening. I see what my kids can do, I can see what their friends can do. I can see the potential they have that I never had. With all the technology and all the possibilities of the things they can do, so I'm hopeful for that. I think for us, I think one of the things people have is too much doubt. I think there is a lot of people who get into politics, but I'll get into psychology. I think there are a lot of really terrible things that people are believing and accepting, which I totally don't. This whole 'triggered' thing is a bunch of fucking shit. They're training people to be basically weak-ass. I was brought up a different way and I was thankful I was brought up a different way. My dad said, 'You can embrace excuses or you could get up and do some hard work.' I think we're living in a society where we embrace excuses, where everything is hard. I'm like, what are you talking about that it's 'hard?' My dad always said, 'The hardest thing to do is fucking do nothing.' You sit there and you watch your whole life go by. It was always an analogy that he put to me: 'Time goes whether you do or not.' What's hard, is when you're whatever age you're going to determine is a whole 65, 75, 85, you're sitting in your rocking chair and you go, 'I can't go back.' If I could go back, you could see everything clearly. I would do this, this and that. So, I think for us, we try rather than be a nostalgic band, we try to be a kick-in-the-ass band. I tell people, 'Don't be a fucking bitch.' As my dad said, 'When you're young, you get somewhere with your fist, in the neighborhood. In the world, you get somewhere with your mind.' Don't be a bitch, don't be a coward. It's a hard journey to like yourself and believe in yourself. People go 'I love myself.' I'm like 'No you don't. Those are words.' Actions is a very difficult thing. I've had some good fights with myself, but they're necessary, not that I don't love myself, but we need to. That's a situation, too many people, they define friendship as the person who goes 'It's okay. Oh, it's okay.' I was always brought up 'What the fuck do you think was going to happen?' [Laughs] 'Of course! Seriously.' 'If someone else did that, you'd go 'You're a fucking idiot.' And now that you're doing it I'm supposed to give you sympathy? No.' People don't like me because I try to be honest and give the advice my dad gave to me without the profanity, of course. The way I deal with my kids is without the profanity and the way that people who cared about me spoke. When you tell people, 'Pat them on the head and treat them like a dog, it's going to be okay,' like a puppy, you're going to grow up to be a dog."