In a brand new interview with The Salt Lake Tribune, Mike Muir called the 2016 addition of former SLAYER drummer Dave Lombardo to SUICIDAL TENDENCIES' lineup "literally… just a power kick in the butt." He said: "Dave's a little different than me. I think every show might be the last one, not in a defeatist type of way, but I take that approach; I learned a long time ago there's no five-year plans… But we take it tour by tour, and I think that's a good approach. Dave's kinda like, 'I'm gonna be playing drums 'till I'm 85.' That's how he lives his life," Muir added. "And it's different, but it's a similar kind of approach. I think that every show is very important. And his whole thing, as a truly legendary drummer, people are gonna see him play, and he wants to be there and blow people away. We've kinda intersected at a great point, where we're here to blow people away rather than be nostalgic."

Muir also hinted that SUICIDAL TENDENCIES' latest album, "World Gone Mad", could very well be the band's last. "You never know what's going to happen," he said. "So I feel very comfortable — if that's the final chapter, that's great. When you enjoy what you're doing, you wanna keep doing it, but I've got three kids, too. And everybody has things going on. The last few years, we've been gone a lot, to the point where my youngest kid, when I get up to go to the store, is like, 'Dada! Where you going?!' It's like, 'You can let go of my leg, I'm just going to get some milk. It's okay.' You gotta listen to your family, you know? That's really important. But so far, they're really supportive, and they know what I'm doing. They go to a lot of the shows and they see it firsthand. And so they know that Daddy wants to be at home, but there's a lot of people who appreciate what he's doing. And they like it too, so that's good."

Lombardo made his recorded debut with SUICIDAL TENDENCIES on "World Gone Mad", which came out at the end of September.

"They wanted me to be myself and their music is very drum friendly with some amazing structuring and vocals and lyrics," Lombardo told NorthJersey.com about the effort. "They gave me the freedom to do what I wanted and I gave the songs what I felt they needed."

Dave added that playing SUICIDAL's classic songs live "brings back some really good memories. I remember driving the van on one of our early SLAYER tours and me and [late SLAYER guitarist] Jeff Hanneman would listen to their first record and switch off singing the lyrics." 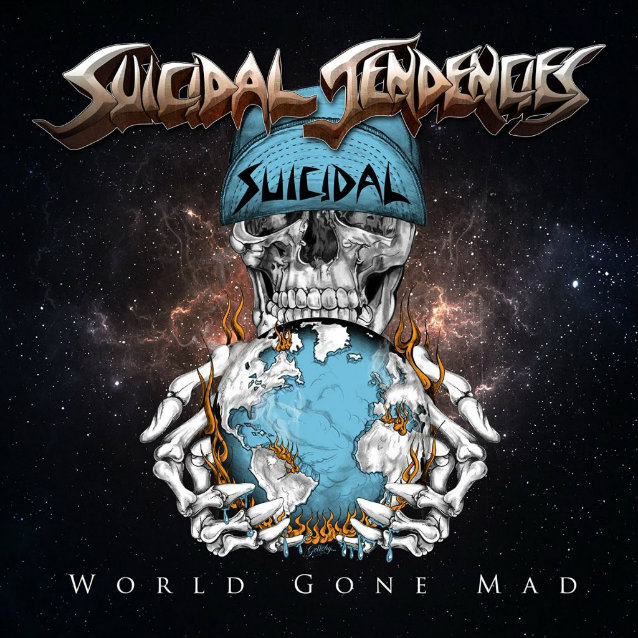