Greek old-school thrashers SUICIDAL ANGELS filmed their May 2008 concert in Athens for an upcoming DVD titled "Live Domination". According to the band, "the DVD will feature the whole show and 100% live sound. No overdubs whatsoever! It will also feature our two video clips off 'Eternal Domination' and a full band biography.

"Though we feel quite confident about picture and sound, we certainly don't pretend that our self-financed release meets the highest quality criteria. Therefore expect the price to be substantially low, compared to major band DVD releases. We certainly do not wish to rip anyone off!

"The front cover of the DVD package, designed by George 'Grin' Prasinis, [can be viewed below]. George has designed almost all SUICIDAL ANGELS artwork to date and we believe he once again did a killer job. We hope you like it as well!"

Vasilis Mazaris and Elena Mihailidou of Metalzone.gr earlier in the year conducted an interview with Themis from SUICIDAL ANGELS (see video below). Themis spoke about the band's latest release, the experience of touring with great acts like ROTTING CHRIST and his feelings about the group's tour with ONSLAUGHT. He also talked about the difficulties the band had to face before it finally got a record deal, how the music business is rather skeptical towards Greek musicians and how touring is the key to draw attention to what you do and what you have to offer as a band. 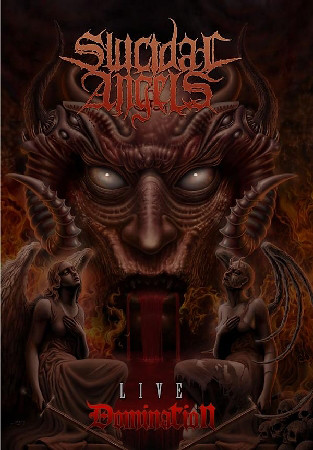