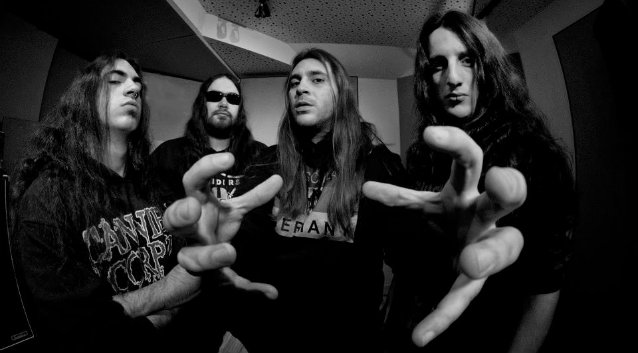 Greek thrashers SUICIDAL ANGELS will release their new album, "Divide And Conquer", on January 14, 2014 (one day earlier internationally) via NoiseArt Records. The effort will be made available as a limited digipak, vinyl LP in different colors and as a digital download.

The official lyric video for the song "Marching Over Blood" can be seen below.

Comments SUICIDAL ANGELS guitarist/vocalist Nick Melissourgos: "We recorded again in the Prophecy & Music Factory Studios and the mix and master this time was done by Fredrik Nordström (HAMMERFALL, IN FLAMES, ARCH ENEMY) at Fredman Studios. We didn't know what to expect for the final result, but what we got is killer. He managed to combine the old-school feeling of our music with an up-to-date production of 2013. [It sounds] absolutely massive!"

The cover artwork for "Divide And Conquer" was created by another well-known name in the metal biz — legendary cover artist Ed Repka, who has previously worked with MEGADETH, DEATH and MUNICIPAL WASTE.

Adds Melissourgos: "If you notice, in the pit, it's not people fighting, it's zombies. Also the crowd isn't human, they are zombies. They are the souls of people who have no human feelings anymore. They represent the ugliness and the inhumanity of the humans. Thus turned into something else, they are easier to be conquered and manipulated."

The "Divide And Conquer" artwork is said to be the "perfect mirror" for the album's lyrics, because once again, SUICIDAL ANGELS isn't really interested in booze, boobs and slimy aliens, but instead likes to reflect on the everyday horror of our lives.

"The main subject is the contemporary situation that we all are living in," explains Melissourgos. "There is so much power in the hands of few who have the ability to do everything, but their only fear is everyday and common people. So the only, most direct and easiest solution is to mentally disease the population, in order to fight each other, in order to misjudge reality and not being able to tell what is important and what not. So, like this, without unity, it is easier to become a slave."

SUICIDAL ANGELS will embark on a European headlining tour in January and February 2014. Support on the trek will come from FUELED BY FIRE, LOST SOCIETY and EXARSIS. 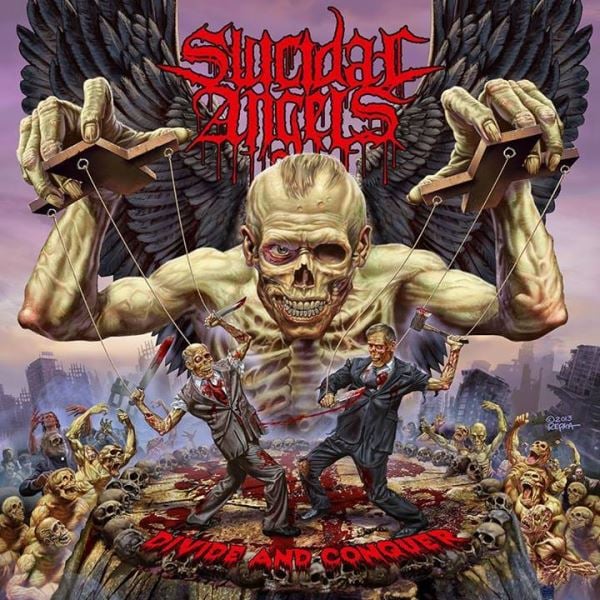