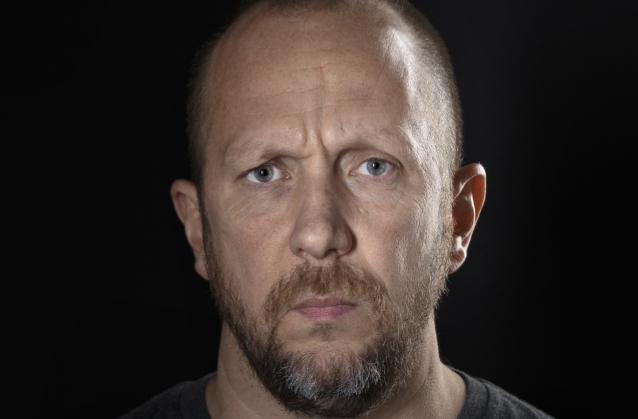 SUFFOCATION vocalist Frank Mullen recently spoke with Josh Rundquist of That Drummer Guy. The full conversation can be streamed below. A few excerpts follow (as transcribed by BLABBERMOUTH.NET):

On how he decided that the upcoming "Death Chopping North America" tour would be his final tour with SUFFOCATION:

Frank: "I've been talking about it [for] about the last five years or so. I've only been able to do some things here and there, and I can't really even tour full-time this much anymore. Pretty much, I've been thinking about it, and I said, 'I want to do one last tour here in the States to come out and see everybody one last time.' I wanted to make sure [to do it] while I could still do it and give it one last hurrah there, because it gets tough — it gets tough on the vocals, everything like that, to be singing like that for 30 years. It's not as easy as it used to be, so I wanted to take the opportunity to come out and see everybody one last time... It's been a blessing to do this for 30 years, and I also wanted the guys to continue forward with Ricky [Myers] singing and everything. It's not like, 'Is Frank going to come? Is he going to be on the new album? Is he going to do this?' It just felt right for me, and I'm happy with where I'm at. I've accomplished a lot of things with this band, and it's something I love, it's something I'm definitely going to miss, but I feel good where I'm at, and I'm okay with it.

"It will be sad, definitely. I will miss it. In that same right, it's going to be interesting to try to get back into a full month's worth of shows. It's been a long time since I've done anything that extensive. We'll see how it goes. I'm looking forward to it. I'm just hoping that the voice holds out and everything holds out for the entire tour, and all goes well. I'm pretty sure it will, and I'm looking forward to it, but it's definitely going to be something that I'm going to miss. It's not like, 'Oh, you know what? I don't want to do this anymore.' It's more kind of like, I just feel like it's the right time for me. I'd rather go out when I can still do it than when I can't."

On the tour's setlist:

Frank: "We're going to throw in probably a few things that we haven't played in a while. We'll take some songs here and there from different albums, and it'll be a nice set that I think everyone will be happy with."

Frank: "It's awesome. I think the album came out great. Terrance [Hobbs] is an amazing writer. He's been doing this a long time. That will be my last album, and it's sad in a way, because I've done this for 30 years. I'll definitely miss it, but I've had nothing but great times doing this, and I think that's a great album to end my career on."

On the band's chemistry:

Frank: "The chemistry's always been there. It's just one of those things, working with somebody like Terrance, I just know the guys, know how they write and we all just kind of clicked. It was never anything like, 'How am I going to fit this?' or 'How am I going to make this work?' It's always just been something that we're all clicking on the same page."

Frank: "It's not like I'm going to disappear from the face of the earth. I'll get involved with different music projects and stuff like that with different bands – friends and bands that I've met over all the years of playing. Whether it's get together with a few different guys, put together a song or two, just put it out, release that. Nothing like touring-wise or anything, but definitely I will still do some recordings and stuff like that, just for fun."

On his burgeoning career as an actor:

Frank: "I've always wanted to do it. I've had a chance to do a little bit of it here and there with some people, and I love it. It's a little different — it's a different challenge, but I enjoy it. I think what helps me with it and being okay trying to do something like that is because of all the years of being the frontman and lead vocalist of SUFFOCATION. [It's] helped me to connect with people, command a crowd and talk to people and not have that fear. I think that will carry over into acting."