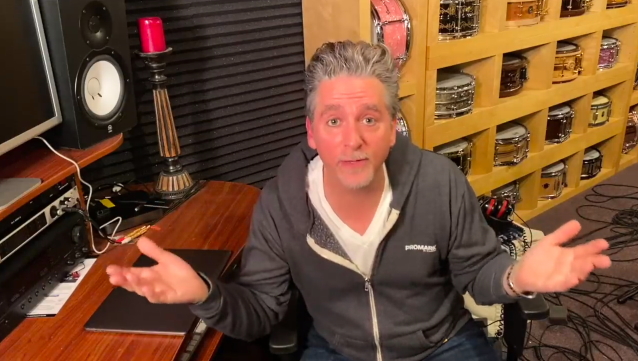 Pre-orders for the disc will begin on April 14 at ToddSucherman.com.

Sucherman, who took over drumming duties in STYX a year before the death of John Panozzo in 1996, said: "This record was something I didn't know I could do on many levels and I'm thrilled to be able to put this out, even at this difficult time. Voluminous thanks to you all for the support, kind words, and the inspiration to move full steam ahead!"

Regarding the musical direction of "Last Flight Home", Sucherman said: "I think most people would expect some sort of drum-centric record or some fusion record, but it's not. It's a vocal record — songs, melodies, stories; it's what I love the most about music. I've always been kind of terrified of the whole singing thing, so that's kind of how I felt that I might be in the right place here. I really wasn't sure that I could pull it off, but I wanted to try to attempt something that I didn't know that I could do with music that I'm extremely proud of."

He continued: "I can already hear the Internet choruses of, 'Hey, Sucherman, what do you think, you're a big singing star now? Why don't you shut up and sit down and play the drums?'

"I have no ambitions of being a big singing star, and there's plenty of drumming on this record — song-supportive drumming; my favorite kind of drumming," he explained. "So I hope you'll listen without prejudice when it comes out."

Full steam ahead! Thank you to all who shared their answers and encouragement! “Last Flight Home” will be released on May 2nd and I’ll be taking pre orders at Toddsucherman.com on April 14th. My webstore is being redesigned right now to accommodate CDs, signed CDs and 44.1 Hi Res WAV files. In late May, 180g Vinyl will be available to ship in hand signed and numbered limited copies-1 through 250—and those will be available for pre sale on April 14th as well as other added signed merchandise. This record was something I didn’t know I could do on many levels and I’m thrilled to be able to put this out, even at this difficult time. Voluminous thanks to you all for the support, kind words, and the inspiration to move full steam ahead!