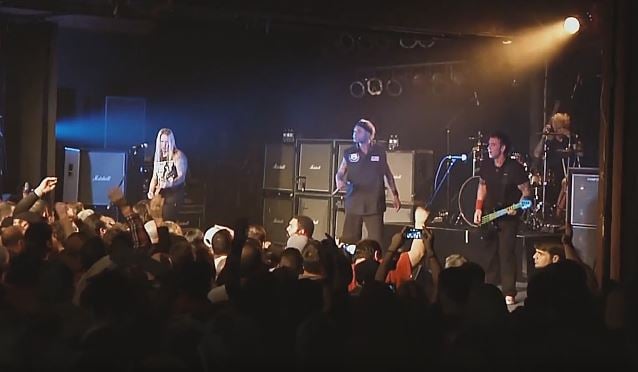 Multi-camera, semi-professionally filmed video footage of STUCK MOJO's December 26, 2014 reunion concert at the Masquerade in Atlanta, Georgia can be seen below. The rap/metal pioneers' lineup for the show included Rich "The Duke" Ward on guitar, Bonz on vocals, Corey Lowery on bass and Frank Fontsere on drums. This marked the first time Rich, Bonz, Corey and Frank had shared the stage since 1998.

Speaking about why the reunion of STUCK MOJO's classic lineup fell apart less than a year after the Masquerade concert, Ward told "Talk Toomey": "We did the reunion show the day after Christmas [2014], which was kind of the homecoming, hometown Atlanta show, and then we did two shows in April [2015] — one in Charlotte, and then we did a festival in Virginia. The Charlotte and Virginia show were together, and it wasn't really until after the Charlotte show, I was, like, 'Ugh.' And all of us were the same way; we all kind of had the same [feeling about it]."

He continued: "There is a sense that people would like to frame this as a 'Rich-versus-Bonz' or 'Bonz-versus-Rich' thing, which it never has been. It's always been [that] we're a band and we make decisions as a band. Part of it was, too, that after the third show, which was the festival, Corey and I had spoken… Corey actually filled in on bass for us for FOZZY on a European run that we did, and it was great; we were getting along really good. And then Corey obviously got this offer to go play for SAINT ASONIA, and he says, 'Man, I don't really know what's going on schedule-wise now, because I'm the new guy, but I am in the band, and I'm kind of waiting on confirmation of what the touring schedule is gonna be looking like and stuff, but this is pretty much looking like my deal, my gig.' 'Cause we had asked him to do more FOZZY shows as well, 'cause it was a really cool thing, for he and I and Frank to be on stage again together. But he knew, I knew, everyone knew, with that lineup, the SAINT ASONIA thing was going to take off; there was no doubt that that thing was going to be one of the bigger releases, certainly of the year, and possibly it could be one of the bigger bands of the genre. So the idea that we were going to carry on with Corey was obviously not going to happen."

Ward added: "When Bonz leaves the band, as he has a few times, it isn't like we splinter off and it's, like, two guys go one way and the manager follows this guy. It's always [that] everybody else stays intact and then Bonz leaves. And the reason is… It's not because we don't like Bonz. Bonz is a great guy. As a matter of fact, he stayed at my house many times. My wife loves him, I love him, my dad loves him. He's a sweet man, and he's a great entertainer. I like being onstage with him, 'cause he's crazy, right? I mean, he's the real deal. And that's what makes him such a powerful frontman — that it's real. There's none of this performance that he's putting on, the show… What you see is what you get. And when I was in my 20s, dealing with that energy was… For me, I was crazy too. I mean, we were fighting all the time, and I don't even mean within the band; of course we did. I mean, all four of us, we were in a van for three hundred days a year, so we fought like cats and dogs, but we also fought as a gang against other bands and against fans. We were just living like wild dogs for years on the road, which was great, which is what made us a great live band, and at some point, when we started getting into our 30s, I think we all just started saying, 'Man, this kind of energy is going to get one of us killed.' And the joy was gone. Now, we'd walk off stage feeling like we were doing something special and unique, but the joy of making music was gone, because the relationships were so splintered and so fractured. And this was right when we were making the 'Declaration Of A Headhunter' record in 2000. And I just told the guys, I said, 'Man, I just don't wanna do this anymore,' and everybody else said, 'Dude, me either.' So Frank and I, and Dan Dryden, who was the bass player at the time, and the manager and the booking agent and all the crew guys decided that we were gonna do this SICK SPEED band, which basically was just STUCK MOJO but with a singer. And then we were also doing FOZZY, and it was the same guys in that band, same crew, same manager, except for Chris Jericho was singing. So we stayed together as a unit. Now, obviously, we had a couple of lineup changes over the sixteen years since 'Declaration Of A Headhunter', but the one commonality has always been that nobody ever left this organization to go play with Bonz and his solo band.

"For folks who are wanting to make this an issue of 'Rich versus Bonz,' it's, like, listen, everybody else was free to go play with Bonz, the same way I was free to go do another project with Bonz, or do STUCK MOJO with just Bonz and I. Like I said, it all came down to, we just couldn't do business together anymore. And it was all of those things that make him such a special and unique artist is the things that made us decide we just didn't wanna do it with him anymore. It just became difficult, it became strenuous. And again, there are some things that I don't wanna share because it's just stupid and I don't wanna throw anybody under the bus, but there were some legal things that were keeping us from being able to do certain tours and stuff. And it was at a place where we had to make a decision: Is this band wanting to move forward? 'Cause if it's going to move forward, we're gonna have to make a change."

Rich went on to say: "It was the same thing that happened to [2007's] 'Southern Born Killers', where I had written most of the album with the idea of Bonz being the vocalist. The same thing I did with 'Here Come The Infidels'. I had already written three or four songs, and we were already into the process. So I was married [to the idea of making a new STUCK MOJO album]… Once I'm sitting there on the side of the river with a pole in the water, I'm gonna fish. We're gonna make the record. And that's when we had a band meeting, and everyone sat together, including management and our agents, record company. 'What are we gonna do?' And we made a decision to move forward and just see what happens, and see if there's another guy out there. And I met Robby J, who is now the vocalist of the band, I met him online. The timing was just… it wasn't an accident. The day after we split with Bonz, I saw a video of him online. And it wasn't like I was on YouTube searching."

Ward added that while he still has tremendous respect for Bonz as a frontman and entertainer, they can simply no longer be in a band together. "The problem is that the great frontmen who can tap into that moment, into the burst, it's the same thing as… I mean, you see these frontmen throughout history, the ones who can't turn it off and have a real hard time leaving that on the stage are the ones where there's problems," he explained. "And I don't even have to bring the guys up; you can name the ten or fifteen frontmen or guitar players who you read about in the news all the time, because they can't leave that energy on stage. You've got guys like [Ronnie James] Dio and Alice Cooper and Rob Zombie, who are absolute maniacs on stage, who are just great — they have this thing — and when they come off stage, it's not like they're a different person, they just know how to bottle it. It's the same thing as a race car driver who gets in his car and drives 90 miles per hour to get a soda. It's, like, 'No, no. Wait until you're on the track.' It doesn't mean you can't drive fast, but you have to be able to…"

He continued: "If you want to be an artist, and being an artist means that you have to work — at least in a rock band — it means you have to work with other people. It's the same thing as there are people who can play on baseball teams, who can play in group sports, and then there's people who just need to play golf and tennis, because it's hard to play in a group environment because of what they carry. And I'm sure there are other guys who will be a great fit for Bonz."

STUCK MOJO's new album, "Here Come The Infidels", was released on June 24. The CD was once again produced by Andy Sneap, who has previously worked with MEGADETH, EXODUS, TESTAMENT, KILLSWITCH ENGAGE and ACCEPT, among others.