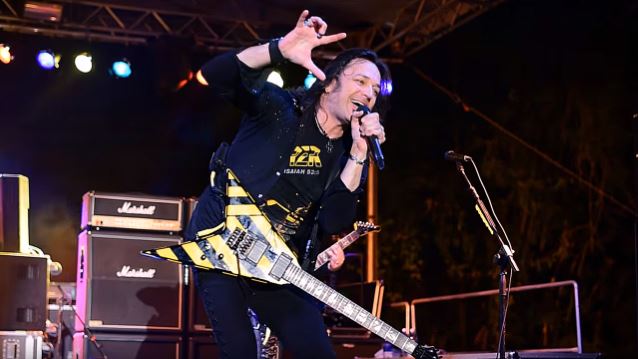 In a brand new interview with TheGreat Southern Brainfart, STRYPER frontman Michael Sweet addressed accusations by some fans that the band's "faux Christian schtick" is nothing more than a marketing "gimmick." He said: "The people that do say or have said that it's a gimmick or that we do it for the money, I think that's one of the stupidest things I've ever heard. If you break it down and think about it for a second, why would we choose to sing about one of the most unpopular things in our society to make money? There's no sense in that. First off, we haven't made that many bucks and second of all, if people only knew the heat that we've taken and still take on a daily basis because we stand for what we stand for."

He continued: "I'll also stand by this and say that I feel like we're bigger rebels than most bands out there because of what we stand for. Metal is all about rebellion and guys who sing about God are a bunch of wimps and they're not rebellious at all. I've been challenging that statement saying that we're more rebellious than most out there. You go find me one metal band that's going to go to Indonesia, get on stage, sing about Jesus and throw bibles out in front of a bunch of Muslims. Go find me one."

Sweet also talked about the fact that STRYPER is more honest in its continuous efforts to emphasize Christian values and messages than many metal musicians who sing about Satan and warfare but go to church on Sunday. He said: "Tom Araya from SLAYER gets up there with the pentagrams and upside down crosses and the screaming and the evil but then he gets off stage and goes to church. Don't get me wrong, I think that's great, but it also brings into question the depth of what they're doing and who they're doing it for."

Asked if it's an underlying goal of STRYPER to get all of its fans to convert to Christianity, Sweet said: "Absolutely not. We never try to convert people. I mean, if there's someone who's there that wants to talk to us about God or say they're just broken and are looking to learn more about God, of course. We're going to do that. We'll have dinner with them and talk to them all about it, but we don't get out there and say, 'Turn or burn in hell!' A lot of Christians take that approach but we don't. We're not about that and we've never been about that. That turns me off just like any other person. We're just all about loving people and hanging out with people. We go and perform in bars."

He continued: "Rob Halford [JUDAS PRIEST] came and saw us in Canada a few years ago. We hung out backstage, had a drink, and he came up on stage and jammed with us. We're friends with all these guys and that's what it's all about. It's about love and respect."

STRYPER's new album, "Fallen", entered The Billboard 200 chart at position No. 43 with first-week sales of just over 10,000 units — nearly all from pure album sales. The set follows the No. 35-peaking "No More Hell To Pay", which was released in 2013.

"Fallen" was released on October 16 via Frontiers. The CD was tracked at SpiritHouse Recording Studios in Northampton, Massachusetts and includes a cover version of the BLACK SABBATH classic "After Forever".