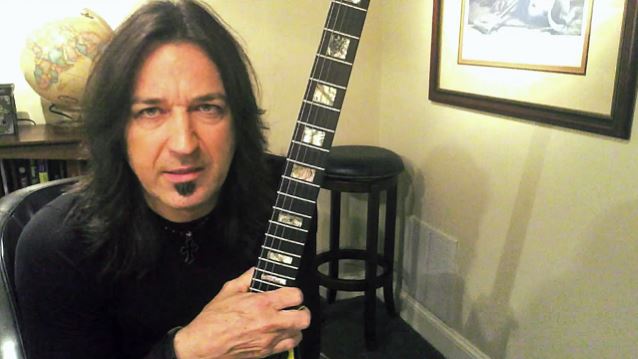 "Fallen", the new album from STRYPER, will be released worldwide on Friday, October 16 via Frontiers. The CD was tracked at SpiritHouse Recording Studios in Northampton, Massachusetts and includes a cover version of the BLACK SABBATH classic "After Forever".

The first song from "Fallen", "Yahweh", was co-written by SEVENDUST guitarist Clint Lowery.

A new video message from STRYPER frontman Michael Sweet regarding how the collaboration with Lowery came about can be seen below.

Sweet said: "I met Clint Lowery of SEVENDUST on a plane last year. He said hello and when we got off the plane we took a photo and he mentioned the influence STRYPER was on him when he was younger. It was surprising to hear due to the obvious talent that Clint is blessed with. We started following each other on Twitter and Instagram and then we exchanged contact info. I reached out to Clint and asked him if he would like to co-write a track or two for the new STRYPER album. Clint agreed and sent me a few riff ideas. I was instantly drawn to the riff that he sent which eventually became 'Yahweh'. I took his original idea and somehow created this 6:30-minute song, which is quite epic and honestly may be one of the most powerful songs we've done in a long time. I sent it to Chris Jericho [FOZZY] and he texted me, writing, ''Yahweh' is your best tune, maybe since you reunited.'

"Clint is a very great and gifted writer so I wanted to have him involved in one way or another.

"Once the song was mixed, I sent it to Clint and he responded with, "The tune is amazing, man. It's got that old-school spirit with this modern take. That choir vibe on chorus is beautiful. Vibe change for the solo. Epic, my man. Solos are stellar. I don't remember sending anything near this cool.'"

He added: "The album was written and arranged very quickly (9-10 days, actually). This by no means reflects on the quality of the album. It's some of our best material to date and so far those who have heard it have said the very same.