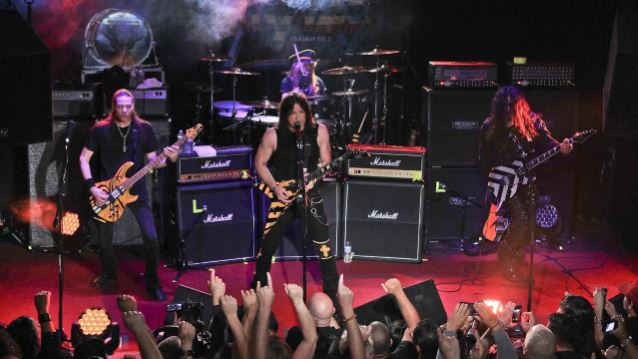 Christian hard rockers STRYPER will release a concert CD/DVD combination called "Live At The Whisky" on September 23 via Frontiers. The live recording was captured at a sold-out show last November at the legendary Whisky a Go Go in West Hollywood, California. The 16-track collection documents the band's first show in support of its latest, critically acclaimed release, "No More Hell To Pay". From the show opener "Legacy" to the final notes of show finale "Soldiers Under Command", "Live At The Whisky" documents STRYPER's rich musical legacy that spans over 30 years. The original lineup comprised of Michael Sweet (vocals/guitars), Robert Sweet (drums), Oz Fox (guitars) and Tim Gaines (bass) showcase the musicianship and songs that garnered the band a huge fan base in the mainstream world and the Christian market.

"Live At The Whisky" was produced by Michael Sweet and is available for pre-order at Amazon.

"We've always wanted to record a live album that captures the rawness of the band and this is it!" says the band. "We couldn't be more thrilled then to have captured this at the infamous Whisky, where it all began for us. After 30 years, we're still proud to do what we do and hopefully it shows. This is an intimate performance, the way it should be."

The concert will be broadcast on AXS.TV on September 28. Check local listings and providers for more information on the television debut of "Live At The Whisky" this fall.

The track listing for "Live At The Whisky" is:

A trailer for the DVD can be seen below.

"No More Hell To Pay" sold around 9,600 copies in the United States in its first week of release to debut at position No. 35 on The Billboard 200 chart.

"Second Coming", a collection of re-recorded versions of STRYPER's classic songs, opened with around 4,400 units back in April to land at No. 117.

"No More Hell To Pay" was released on November 5, 2013 in North America via Frontiers Records. The effort was made available in two formats — standard CD and deluxe digipak featuring exclusive video content. Produced by STRYPER guitarist/vocalist Michael Sweet himself, the set features some of STRYPER's strongest and heaviest material ever.